KARACHI: Sindh witnessed ups and downs in its daily COVID-19 infection rates during the week, as authorities in the government confirmed detection of another 1,414 positive cases out of 7,400 samples during the last 24 hours ending on the morning of June 24 with new 39 related deaths, taking the tally of total infection to 74,070 and death to 1,161 for the province. 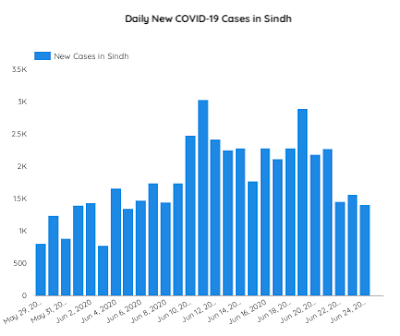 While the health department remained silent on the subject, some observers noted that the COVID-19 consultants to the department yet need to device a foolproof style of sampling and testing, which could help understand the trend of the lethal virus’s onslaught across the province.

The Sindh Chief Minister, Syed Murad Ali Shah, in his daily COVID-19 statement, informed that 32,722 infected people were receiving the treatment at homes (31,184 cases), isolation centres (81) and hospitals (1,457). He further stated that 733 patients were in critical condition, urging people to adhere to the precautionary and preventive measures.
The details of people expiring of COVID lately were delivered neither by the Chief Minister nor by health department’s officers.
According to breakdown of Karachi’s new infection, as stated by the Chief Minister, Karachi East district reported the maximum of 185 cases during the last 24 hours, followed by South (184), Korangi (97), Malir 70), Central (68) and West (40).

An official report issued on June 20 had revealed that the eastern district of Karachi was housing 2,356 active cases, while enduring 147 deaths. Its overall infection rate came as 69.5 per 100,000 people, while the case fatality rate stood at 3.6.

Karachi reported the maximum number of 644 cases during the last 24 hours, followed by Hyderabad (74), Mirpurkhas (33), Sukkur (30), Ghotki (27), Shaheed Benazirabad (25), Larkana (18), Thatta (9), Shikarpur (9), Badin (8), Sanghar (8), Khairpur (7), Naushero Feroze (6), Jamshoro (6), Dadu (6), Sujawal (3), Jacobabad (3), Tando Allahyar (01) and Tando Mohammad Khan (1), according to the Sindh Chief Minister’s statement.
In the meantime, there were 27 beds vacant in the intensive care units of various Karachi hospitals including Dow University Hospital, JPMC, Lyari General Hospital, NICH, Dr Ziauddin hospital, Clifton, and Sessi Kidney Centre and Landhi.
Reinfection
Commenting over some reports related to second viral attack on patients having recovered from COVID-19 in the country, senior microbiologist, Prof Dr Shahana Urooj Kazmi, reckoned that the reported issue needed more comprehensive investigation before drawing any conclusion. It had been reported that a case of coronavirus reinfection was recorded at a hospital in Lahore.
“The re-infected patient, who initially had contracted the disease about three months back and also got recovered, is exhibiting more severe symptoms now in comparison to the symptoms at the time of the first diagnosis, suggesting the existence of more than one strain of SARS-COV-2, the coronavirus which causes COVID-19 disease,” according to a doctor.
Reportedly, a Karachi based hospital has also readmitted patients having recovered from COVID-19.
Prof Shahana Urooj Kazmi opined that the reinfection could also be antibody mediated enhanced infection like in dengue or may be a different strain of the same virus. “May be the strain specific antibody was not effective or the person did not develop neutralizing antibodies,” she opined–PNFS