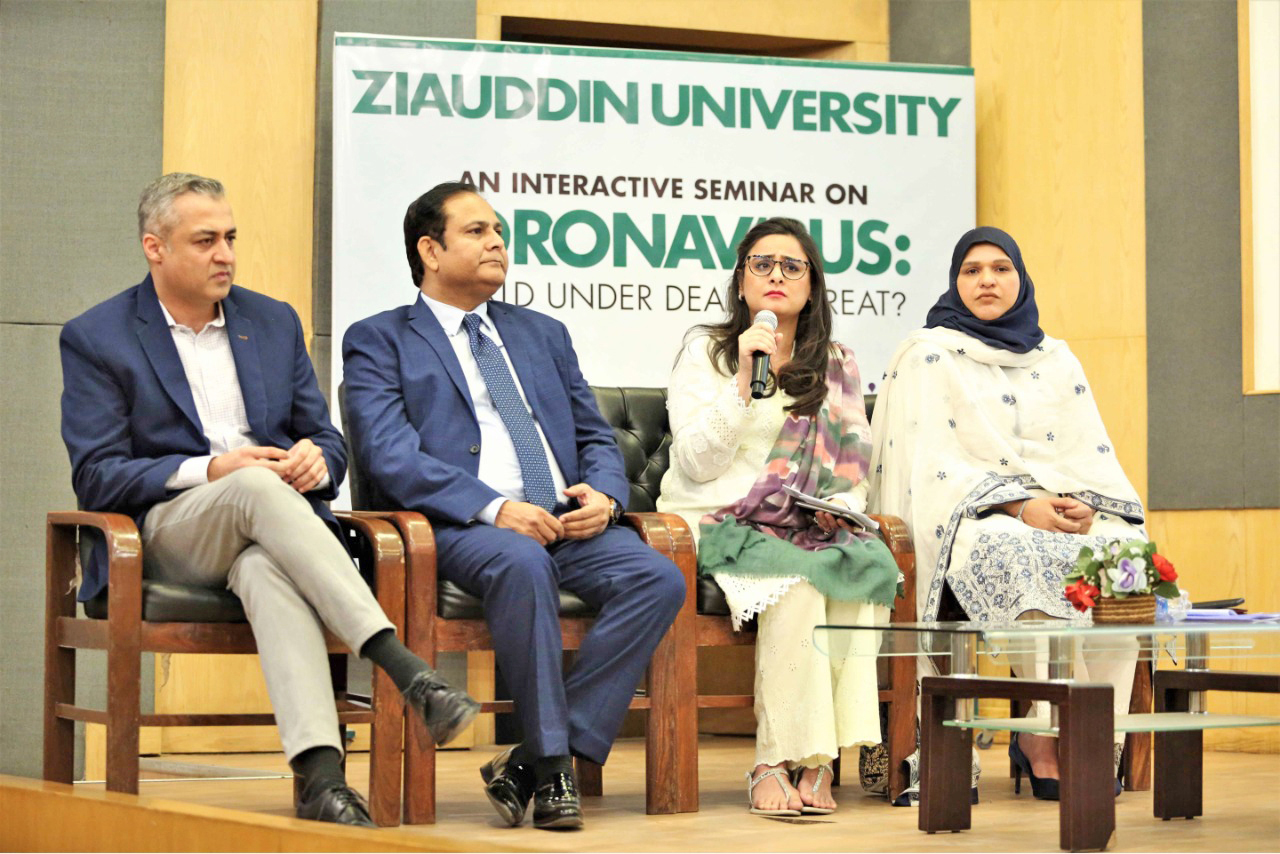 KARACHI: The world has set eyes on Wuhan city of China with concern and precaution for over a month due to the outbreak of 2019 Novel Coronavirus (2019-nCoV) originating from a seafood and animal market there.

The virus caused disease indistinguishable clinically from common infections, particularly respiratory illnesses seen during the winter. This has been transmitted among the people since mid-December and as this newspaper went to the press the virus had reportedly claimed 565 lives in China and two outside the country. Besides, about 28,190 people had been infected in China, while 283 had been detected positive in other countries—including Taiwan, Thailand, Australia, Malaysia, Singapore, Japan, South Korea, Vietnam, Nepal, France, Germany, the United States, and Canada.

Medical experts recommend that patients with fever and signs or symptoms of lower respiratory diseases requiring hospitalization—who traveled from mainland China within 14 days of symptom onset—be assessed for 2019-nCov infection. The novel coronavirus, according to experts, belongs to the same family of the virus that causes severe acute respiratory syndrome (Sars).

Media reports indicated a German man acquired the infection from a colleague who had returned from Wuhan; a person in Vietnam contracted the virus from an infected family member; a tour bus driver in Japan, who had transported tourists from Wuhan, also tested positive for the coronavirus.

Responding to the coronavirus outbreak, the World Health Organisation (WHO) declared a global emergency on January 31 after the outbreak continued to spread outside China. “The main reason for this declaration is not what is happening in China but what is happening in other countries,” said WHO chief Tedros Adhanom Ghebreyesus. “The concern is that it could spread to countries with weaker health systems.”

China had notified the WHO of a pneumonia outbreak of then-unknown etiology on December 31, while on January 9, WHO released a statement explaining that Chinese scientists had discovered a new coronavirus responsible for the outbreak.

Health scientists are trying to gather all the evidence that can tell exactly how this disease is transmitted, while they fear that the spread of the virus and consequential diseases could be at a very high level if it’s aerosolized. Available evidence suggests that the coronavirus spreads only through close contact and through saliva droplets.

Many of the international airports across the globe, including in Pakistan, have been screening passengers arriving through direct flights from Wuhan for signs of coronavirus infection.

“When people hear quarantine, there is instant panic. It’s helpful to remind the public that we isolate individuals who are symptomatic and quarantine those who have been exposed to the virus but are not yet showing symptoms,” said a foreign expert.

The current guidance from the US Center for Disease Control and Prevention (CDC) includes criteria used to guide the evaluation of patients under investigation for 2019-nCoV. These criteria include clinical features such as fever and/or symptoms of lower respiratory illness (such as cough and difficulty in breathing), in addition to travel to Wuhan, China, in the last 14 days prior to symptom onset or close contact with a laboratory-confirmed case or someone under investigation for 2019-nCoV.

Experts say that now is the key time to ensure healthcare facilities have enough supplies of surgical and N95 masks, gowns, gloves, and eye protection. Moreover, this is a perfect time to ensure negative pressure rooms are functioning and frontline staff is vigilant in asking about recent travel history as well as reminding staff of the importance of hand hygiene, staying home when they’re sick, and making environmental disinfection a key.

Internationally, scientists are also pondering the questions surrounding the virus’s spread that whether and how extensively people without symptoms can infect others. “A study of a cluster of five infections in a family in Shenzhen identified a child who was infected with the virus but did not show any symptoms. If such asymptomatic cases are common and these individuals can spread the virus, then containing its spread will be much more difficult,” researchers say.

According to a report published in The New England Journal of Medicine, researchers from several institutions in China, including the Chinese CDC, who studied data from first 425 laboratory-confirmed cases of the virus from Wuhan city of Hubei province, have also described some characteristics of infected patients and estimated the epidemic doubling time.

“According to the new study, the median age of the first 425 patients was 59 years, and 56% of patients were male. Few of the early cases occurred in children — none in children younger than age 15 years — and almost half were in patients aged 60 years or older. The researchers speculated that children may be less likely to be infected or may show milder symptoms.”

Most illnesses — 55% — that began prior to January 1 were linked to the Wuhan seafood and animal market where the outbreak is thought to have originated.

Pakistan Scenario: Following the news of the lethal disease outbreak in China, health authorities also stressed the need for taking precautions against any possible transmission of 2019-nCoV in the country, though they are under pressure in the wake of demands from parents and relatives of over 500 Pakistani students stranded in Wuhan. Parents demanded for early repatriation of their wards from China.

Special Assistant to the Prime Minister on Health Dr. Zafar Mirza expressed the apprehension on February 1 that bringing the students and other citizens back to the country could become a reason for the transmission of the virus in the country. “For us, it is more important to take steps that ensure that the maximum number of people are saved,” the special assistant was quoted in media reports.

He further said that an awareness campaign would be launched on media to inform people about the origin, symptoms, and ways of transfer of the virus in question.

In addition to reviewing the preparedness and needs of the big public hospitals relevant to coronavirus cases if occur in the country, the federal government has also designated various health officials to oversee the entry of Pakistanis from abroad, particularly the People’s Republic of China.

The Sindh Health Department has also designated four focal hospitals, including Jinnah Postgraduate Medical Centre, Civil Hospital Karachi, DUHS Hospital Ojha Campus, and AKU Hospital, which have announced the procurement of various diagnostic facilities, in addition to setting up due to treatment blocks for relevant cases presented to them.

Meetings and lectures: In the meantime, addressing a meeting at the National Institute of Virology, which works under the Dr. Panjwani Centre for Molecular Medicine and Drug Research (PCMD), University of Karachi, scientist Prof Dr. M Iqbal Choudhary said that precaution was the only weapon to fight against the emerging threat of the 2019-nCoV. He, however, noted that there was no pathological laboratory performing a diagnostic test in Pakistan for the confirmation of coronavirus infections.

Dr. Choudhary, who is also the Director of International Centre for Chemical and Biological Sciences, KU, informed the meeting participants that a recent cluster of pneumonia cases in Wuhan province of China was caused by the 2019 novel coronavirus.

“There was a need to monitor and control all immigrants and visitors, livestock and goods at entry points. Passengers at all international airports should be scanned for temperature and suspected individuals should be examined in isolation,” he said.

Dr. Muhammad Rashid, a senior research officer of the KU virology institute, said that there were only seven coronaviruses known to infect humans. “Coronaviruses are a group of viruses that generally exist and maintain their life cycle in animals like camels, bats, cats, snakes, and other wild animals.”

The local and international speakers stressed the need for adopting a sensible approach for handling the situation both by the government and masses. They acknowledged the measures taken in China, where the disease originated and later spread to other countries.

Tracing the history of nCoV, Dr. Saeed Khan said the people coming to Pakistan should be quarantined for 14 days at some designated place(s), adding that only the passengers tested negative for the lethal virus at their country of disembarkation should be allowed to proceed to their places in Pakistan.

He noted that as the virus was new to the corona family it was being taken as a serious threat and researchers too were concentrating on it. “This virus can be averted by washing hands with soaps and detergents, and keeping a distance from people who are coughing and sneezing.”

Vice-Chancellor Dr. Quraishy said that the DUHS Ojha hospital declared as a focal hospital in the case of coronavirus, has established isolation rooms for the suspected patients. “We have already acquired personal protective equipment and efforts are on to get relevant diagnostic kits,” he added.

He informed the participants that the DUHS would be able to diagnose coronavirus in a few days as primers and probes to analyze the samples have been ordered by them, which would be received shortly.