KARACHI: Sindh, being unable to witness any consistency in its COVID-19 infection rates had its daily infection rate crossed 2% on September 17 when authorities confirmed detection of 307 new cases, with four more related fatalities, during the last 24 hours in the province. 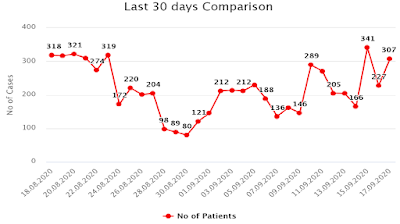 The provincial figures of the new cases increased by 35% against the daily cases reported on September 16. The daily infection rate was recorded at 1.37% on September 14, which changed to 2.49%, 1.70% and 2.20% on September 15, 16 and 17, respectively.
The COVID-19 data suggest that the province has been unable to witness any mark difference in terms of new infection during the last about one month.
The province, which had been reporting over 300 new cases per day in the mid-August, even registering about 300 cases after a lapse of one month, keen observers noted and cautioned extra vigilance and preventive measures to avert any untoward, particularly when the market activities were in full swing and educational institutions and marriage halls had been allowed to resume their long-halted activities. 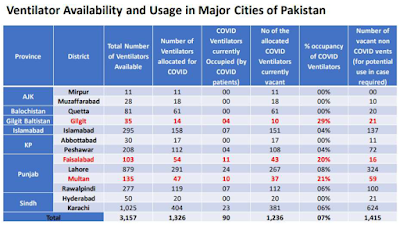 The Sindh Chief Minister, Syed Murad Ali Shah, in his routine COVID-19 statement, shared that with the addition of new cases on September 17 morning, the provincial overall tally of infection had risen to 133,125, while 127,991 patients recovered from the diseases.

He further stated that of the 2,679 active patients, 2,410 were in home-isolation, four in isolation centres and 275 in hospitals, including 173 in critical condition and 23 put on ventilators.
All the four new deaths were registered in Karachi. There were a couple of casualties in Karachi East while one person each passed away in Karachi Central and Karachi Korangi. The tally of deaths, so far, for East, Central and Korangi districts of Karachi stood at 687, 457 and 254, respectively.
The district-wise breakdown of new cases came as: Karachi (163), Jamshoro (28), Matiari (18), Khairpur (14), Dadu (10), Hyderabad (9), Larkana (4), Kambar Shadadkot (3), Sujawal (3), Sukkur (3), Mirpurkhas (2), Tando Mohammad Khan (2), Shaheed Benazirabad (2), Naushero Feroze (1), Kashmore (1), Thatta (1), and Umerkot (1)–PNFS