KARACHI: Sindh’s daily COVID-19 fatalities showed an upward trend on September 8 when authorities in the government confirmed detection of 162 new cases and five related deaths during the last 24 hours, against 136 new infections and two deaths recorded on the preceding day. 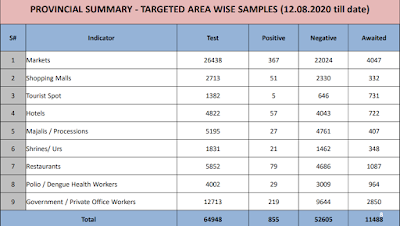 According to official data, Sindh having reported six cases on September 2, had recorded a decrease up to one death on September 6.
The latest five fatalities occurred in Karachi (four) and Shaheed Benazirabad (One), against Pakistan’s total nine deaths on September 8.
Keen observers noted that hospitals in Sindh were needed to revisit their intensive care services in the case of COVID-19 patients.
The government should also assess the survival rate of critically ill patients at public and private hospitals which have been provided with substantial facilities and finances in the name of the diseases, they expressed the view, saying deaths reflects on the performance of the health providers. 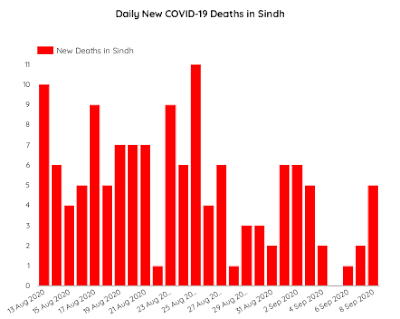 It was learnt that more than a half of the hospitalized patients were undergoing critical phase of the diseases.

The Sindh Chief Minister, Syed Murad Ali Shah, in his routine COVID-19 status statement on September 8, said that health condition of 157 patients was stated critical by doctors, out of which 18 were utilizing ventilators.

“Sindh at present has 3,104 active cases, including 1,804 those kept in home-isolation, six at the isolation centres and 294 at hospitals,” he added.

As many as 8,641 samples were examined by the designated laboratories in the province, with a positivity rate of about 2%–PNFS