KARACHI: Sindh, like other provinces of the country, witnessed the increase in its daily COVID-19 fatalities on September 1 when the authorities confirmed detection of 146 new infections, with six relevant deaths, during the last 24 hours. 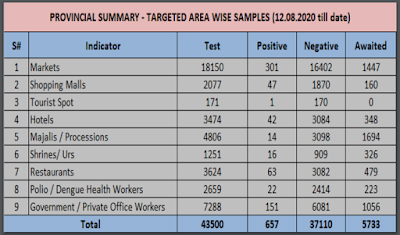 As per the official data, Sindh had reported six COVID-19 deaths on August 27, which gradually decreased to two deaths on August 31. Sindh’s overall fatality toll was recorded as 2,409.
The Sindh Chief Minister, Syed Murad Ali Shah, in his routine COVID-19 statement, issued after a break of a couple of days, shared that the number of patients who were under treatment was 3,822, including 3,504 in home-isolation, seven in government designated isolation centres and 311 in public and private hospitals, out of which 157 were in critical condition.
“As many as 15 patients were receiving the ventilator intervention,” the Chief Minister  added. 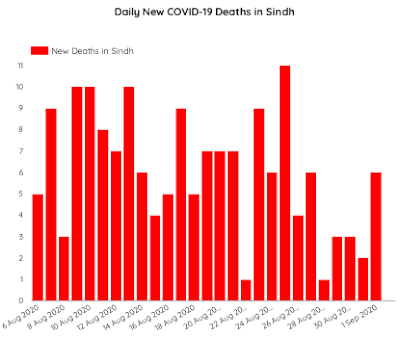 The COVID-19 testing laboratories examined 5,668, against their collective maximum capacity of 14,940, during the last 24 hours ending on September 1 at 8 am.

They in all found 222 samples positive for coronavirus, including 146 new infections. 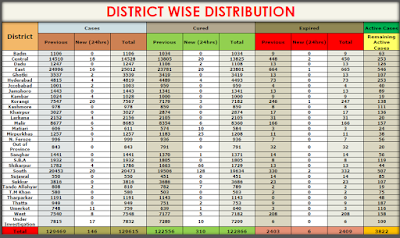 According to an official report, as many as 43,500 samples were drawn from targeted areas/quarters, including markets, shopping malls, tourists’ spots, hotels, majalis/processions, shrines/urs, restaurants, polio/dengue health workers and government and private office workers during a period from August 12 to September 1, out of which 657 (1.51%) were found positive.

On the other hand, COVID-19 tests conducted in the rural areas of Sindh, during a period from August 27 to September 1, revealed that the maximum 1,092 samples were examined at Umerkot, out of which 12 came as positive, 366 were negative, while results of 714 samples were awaited.

It was further learnt that the maximum 665 of COVID-19 fatalities occurred in the Karachi East district, followed by Karachi Central (450), Karachi South (332), Karachi Korangi (247), Karachi West (208) and other, since March 19 when Sindh reported its first relevant death. The two deaths registered in Sindh on August 31 occurred among patients hospitalized at Karachi–PNFS