KARACHI: Amidst government’s apprehension of increased COVID-19 infections and deaths in the coming two to four weeks, Sindh witnessed a stable rate of new infections on June 14 when the health authorities registered another 2,287 positive cases across the province, with 15 relevant deaths.
According to the health department’s data, Sindh’s new infection rate came as 20.42% on June 14, against 20.78% on June 13, 21.38% on June 12. The provincial trends of positivity among the daily tested and positive samples was relatively lower than that of the national. 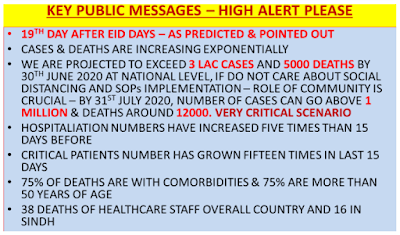 Sindh’s there-day rolling average of Covid-19 came as 20.86%, against the national average of 22.54%.
Keen observers reckoned that Sindh’s daily positive tested cases have been on the higher side in recent days due to increased testing of the suspect cases and the province needed to significantly decrease its positive cases through full compliance of the government’s advisories and conditions relevant to coronavirus containment in both the rural and urban areas.
In the meantime, the planning, development and special initiatives minister, Asad Umar, who is also chairman of National Command and Operation Center (NCOC) on coronavirus at a press conference at Islamabad on June 14, warned that the confirmed cases of the novel coronavirus could double by the end of this month and reach one to 1.2 million by the end of July.
The Sindh Chief Minister, Syed Murad Ali Shah, in his daily statement on coronavirus, informed that Sindh had registered a total 53,805 cases, out of 298,332 tests across the province. As many as 27,368 patients are still under treatment at homes, hospitals and isolation centres, while 573 in critical condition and 80 were on ventilators, he added. 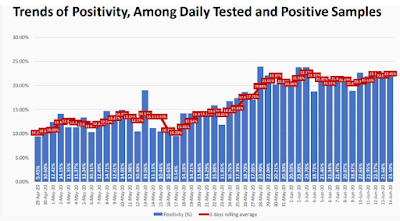 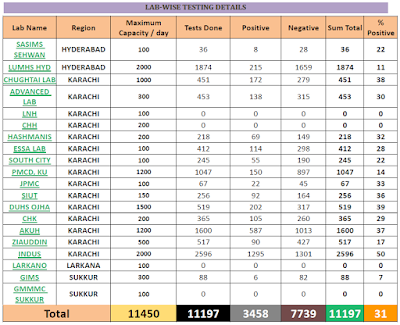 At Karachi, men who lost their lives were in the age brackets of 30 to 75, while women aged from 48 to 73 years. Hyderabad reported death of a man (49 years) and a woman (63 years).
The Sindh health department did not provide any information either about hospitals where the ill-fated people died or medical history of the patients.
However, another official report revealed that as many as 653 patients died at different hospitals across the province, including AKUH (75), CHK (68), GIMS (13), Indus Hospital Korangi (64), JPMC (98), LUMHS (19), Lyari General Hospital (17), DUHS (79), PNS Shifa (15), SIUT (88), South City Hospital (8), Karachi Trauma Centre (10), Ziauddin Hospital, Clifton, (41), NICVD (7), Liaquat National Hospital (8), Patel Hospital (5) and others.
It was further learnt that the 23 patients who died on June 13, included 4 patients who died at home, while another two died off ventilators.
In the meantime, a national coronavirus high alert said that Pakistan was projected to have overall 300,000 CIVID-19 cases and 5,000 deaths by June 30, if social distancing and SOPs were not ensured–PNFS