KARACHI: Sindh witnessed a rise of eight percent in its daily COVID-19 infection rate on June 28 when the authorities in the government confirmed 2,179 new cases during the last 24 hours, with 26 new related deaths, pushing the overall fatalities to 1,269 for the province. 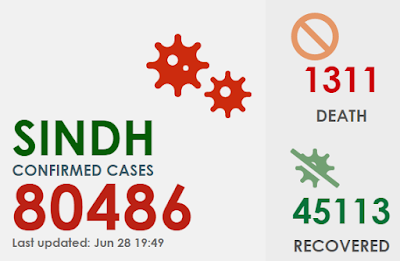 The daily infection rate remained 16% on June 27. Earlier, the rate was registered 21% on June 18, which dropped to 15% on June 22 before another rise up to 24% on June 23 and then went down to 19% on June 24.
Keen observers attributed the highs and lows to the health authorities’ inconsistency in daily testing activities.
There has been a need to significantly step up the COVID-19 testing to achieve a stable data leading to determination of districts and areas, turning safe from the virus point of view.
The official data suggested that the designated laboratories across the Sindh conducted an average of 7,883 tests every day during the period from June 22 to 27, against a cumulative capacity of testing 13,150 samples daily.
In the meantime, it was learnt that the authorities concerned have reduced the sanctioned daily testing capacity of a few laboratories. As such, the maximum combined testing capacity of 21 laboratories stood at 9,150, against 13,150 of the preceding week. 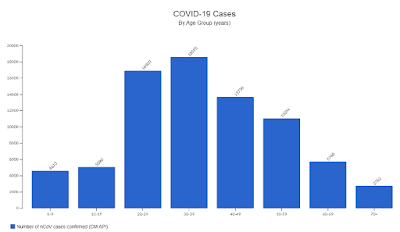 The Sindh Chief Minister, Syed Murad Ali Shah, in his daily statement on coronavirus status, disclosed that 26 people lost their lives to the disease during the last 24 hours ending at 9 am on June 28 across the province.
However, the health department failed to give any details regarding the deaths, which didn’t make it possible to know the name of cities and hospitals where the patients lost their lives and what were their ages.
Such details were released last time by the Sindh Health department on June 22, according to which 921 COVID-19 patients died at Karachi, followed by Hyderabad (40), Larkana (22), Sukkur (17), Shikarpur (11) and other districts.
According to the Sindh health department’s website, Sindh in all registered 80,486 coronavirus infections, out of which 1,311 expired till the evening of June 28. 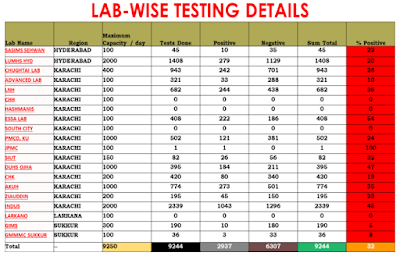 As per a country status report, 38 patients who lost their lives on June 27 belonged to Karachi (32), Hyderabad (2), Larkana (1), Naushero Feroze (1), Sujawal (1) and Sukkur (1). Of the deceased persons, 30 died off ventilators, including 16 who died at home.
According to the Chief Minister’s statement, Karachi reported the maximum 1,406 new cases on June 28, followed by Sukkur (86), Hyderabad (54), Ghotki (40), Khairpur (38), Jamshoro (26), Mirpurkhas (22), Thatta (19), Larkana (17), Umerkot (8), Dadu (7), Tando Allahyar (3), Badin (3), Kambar Shadadkot (3), and Jacobabad (1).
The statement further said that as many as 34,654 COVID-19 patients were under treatment across the province, out of which 88 were in isolation centres, while 1,456 including 655 critically sick were at various hospitals, in addition to 33,110 patients kept in home-isolation.
According to official sources, 23 intensive care beds were vacant at the various hospitals, in addition to 446 high dependency beds, at Karachi on June 28.
Another source added that, in Sindh, 21 healthcare providers lost their lives due to COVID-19 so far, 802 recovered from the diseases, 35 were in stable condition in different hospitals, while 513 were kept in isolation at homes or other places–PNFS