KARACHI: The coronavirus (COVID-19) infections have continued to speed up in Sindh as the authorities confirmed detection of 758 more cases, up from 731 the day before, with nine relevant deaths on May 14.
The province witnessed an increase of about 5,000 COVID-19 epidemic cases, an average 714 cases daily, and 63 deaths at an average of nine daily during the last seven days ending to May 14. 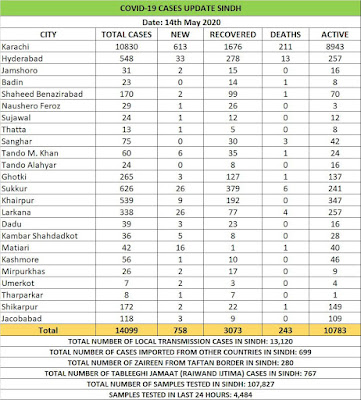 It’s a kind of situation which pointed towards the province to have to fight for a longer period against the epidemic which it came across on February 26, remarked a keen observer.
The Sindh Chief Minister, in his message, said that at present as many as 10,783 coronavirus people were under treatment, 9,307 at home, 915 in isolation centres and 561 in hospitals.
“There were 105 people in critical condition, including 37 those put on ventilators,” he added, saying of those originally infected (3,073) were declared recovered.
According to the Sindh health department’s daily update on coronavirus, six patients, including two women, lost their lives in Karachi. They were aged from 40 to 70 years.
Hyderabad reported death of two infected people including a woman of 60 years. The deceased man was 52 years old. In addition, a 57-year-old man succumbed to the infection at Larkana. The department did not provide details about the places where the ill-fated patients were taking the treatment and for how long.
With the reporting of new infections Sindh’s tally of COVID-19 cases has shot up to 14,099. Karachi reported the maximum 613 new cases, followed by Hyderabad (33 cases), Sukkur (26), Larkana (26), Matiari (16), Khairpur (9), Tando Mohammad Khan (6), Kambar Shahdakot (5), Jacobabad (3), Dadu (3), Ghotki (3), Jamshoro (2), Shaheed Benazirabad (2), Mirpurkhas (2), Umerkot (2) and Shikarpur (2), while Thatta, Sujawal, Naushehro Feroze, Kashmore and Tharparkar reported one case each–PNFS