The Sindh government data regarding COVID-19 outbreak in the province have revealed that only 307 (11.40%), out of 2,692 patients have recovered from the disease till April 24 in Karachi.
To some observers, this recovery pace of COVID-19 patients at Karachi reflected two factors. Ether many of them were taking long time for recovery due to their poor medical conditions or their physicians took considerable time before starting any treatment in their cases while a majority of them were young patients. 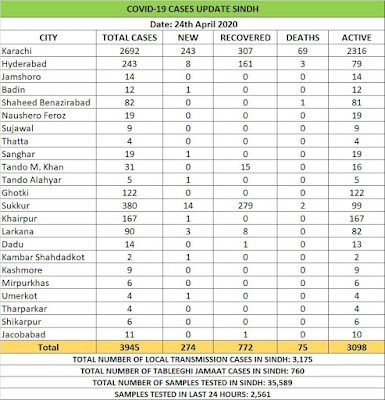 They further remarked that the time taken for recovery in most of the cases was seven days, which could be prolonged to over one month depending on the severity of symptoms and other comorbidities and age of the patients.
“The time in which a patient recovers after contracting the infection depends on how the disease progressed.”
The World Health Organization (WHO) has reported that about 80 per cent of COVID-19 cases globally were mild, which meant that these cases, which usually involved fever, cough and perhaps shortness of breath, recovered without much of an issue.
“The younger, the patient with no other medical complaints, the greater could be the chances of quick recovery while some patients may not even be aware that they are sick.”
A comparative study of the daily official reports pertaining to coronavirus suggested that there were a total 417 people having contracted the virus in Karachi, out of which 63 (15%) were declared recovered by April 5. Another district of Sindh housing major Covid-19 patients was Sukkur, where the rate of recovery was 21% on the same date.
The Sindh Health department data released on April 24 revealed that the number of patients suffering corona was 243 at Hyderabad, 380 at Sukkur and 31 at Tando Mohammad Khan, out of which 161 (66%) recovered at Hyderabad, 279 (73%) at Sukkur and 15 (48%) at Tando Mohammad Khan.
However, a source privy to the tracking and testing of coronavirus patients in the city doubted that the official data did not account the patients who have been receiving treatment at homes.
In the meantime in his routine video message, Sindh Chief Minister Syed Murad Ali Shah on April 24 said that coronavirus had claimed two more lives, raising the infection death toll in the province to 75, while 274 new cases were confirmed on the day, pushing Sindh’s coronavirus tally to 3,945.
According to him, as many as 49 among the infected persons were in critical condition, including 15 those put on ventilators.
He said that the total number of patients having recovered from the diseases in Sindh rose to 772 on April 24 as another 42 patients were sent home after recovery. Of the remaining under-treatment patients 1,893 have been isolated at home, 767 in isolation centres and 440 at hospitals, the Chief Minister stated.
The Sindh Health department summary said that two coronavirus patients died at Karachi, a woman aged 85 years and a man aged 60 years, while 243 new COVID-19 cases were detected at Karachi.
The other districts that reported new cases included Sukkur (14) Hyderabad (8) and Larkana (3), followed by Badin, Sanghar, Tando Allahyar, Khairpur, Kamber Shahdadkot and Umerkot which reported a case each. The overall coronavirus infection rate came as 11% for Sindh–PNFS