KARACHI: The share of the Karachi districts in the daily COVID-19 infection reporting remained almost 3.5 times higher than that of the interior districts of Sindh on August 19 when authorities in the government registered 317 new cases out of 8,561 samples, with seven new fatalities, during the last 24 hours across the province. 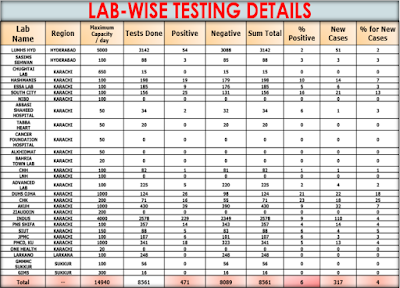 Official data revealed that COVID-19 testing laboratories at Karachi in all tested 5,011 samples during the last 24 hours ending August 19 morning, with a new case rate of 5.24%. while laboratories in the interior districts of Sindh performed in all 3,550 tests and registered 54 (1.52%) new positives.
The testing labs in all had detected 471 cases positive for coronavirus, including 317 new cases.

On the other hand, details of COVID-19 cases provided by the Sindh Chief Minister, Syed Murad Ali Shah, in his daily statement on August 19, suggested the percentage of Karachi in the entire newly detected cases as 57%.

He remarked that the tally of people infected by the virus in the province, so far, was 127,060 (14%), out of 914,884 samples while 120493 people recovered from the disease in the province.
According to him, as many as 4,225 people were receiving treatment for COVID-19 at hospitals (371), isolation centres (7) and homes (3,847). The number of patients suffering the diseases in critical condition was stated as 234, including 37 utilizing the ventilators.

No account of deceased persons was given in the official statement on August 19 but an official report revealed that five people who lost their lives on August 18 in the province included three from Karachi and one each from Hyderabad and Dadu. One of the five victims of the deadly virus died at home.