Coronavirus Update: Sindh ahead in fatalities

KAREACHI: Amidst a rain interrupted field activities, Sindh added three more COVID-19 deaths to the national tally on August 29 when it registered 89 infections during the last 24 hours across the province. 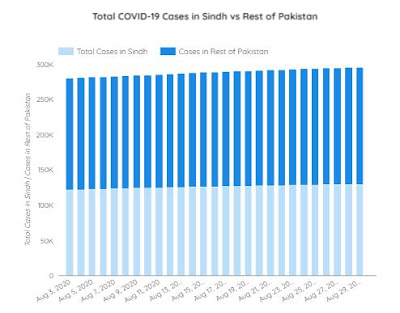 According to the national COVID-19 dashboard managed by the government, country had in all four related deaths reported by Sindh (three) and Punjab (one).
The provinces that reported new confirmed cases on August 29 were Sindh (89 cases), Punjab (42), KPK (46) and Balochistan (38).
Sindh’s overall number of infections came as 129,268, with total 2,398 relevant deaths, while the number of people cured of COVID-19 in the province stood as 122,902, including 67 who recovered from the disease on August 29.
There were still 3,968 patients receiving treatment at homes, hospitals and isolation centres in the province–PNFS