Coronavirus Update: Sindh ahead other provinces in deaths, infection

KARACHI: Sindh, in terms of COVID-19 fatalities reported during the month in progress, stood ahead of other three provinces on July 21 when authorities in the country recorded 551 new infections, with 22 related deaths during the last 24 hours. 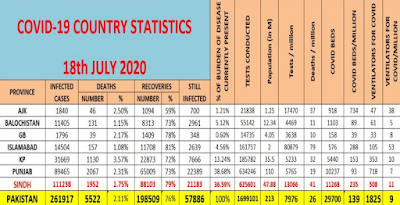 According to official data, Sindh had in all 664 COVID-19 deaths from July 1 to 21 in its population of 47.88 million, as such its deaths per million came as 14, against six of KPK, three of Punjab, and one of Balochistan for the same period.
Pakistan’s death/per million remained six during July.
The Sindh Chief Minister, Syed Murad Ali Shah, in his daily COVID-19 statement on July 21, remarked that 6,676 samples were tested during the last 24 hours across the province, out of which 551 were detected positive for the virus. Sindh has tested 656,593 samples so far, with a positivity rate of 17%. 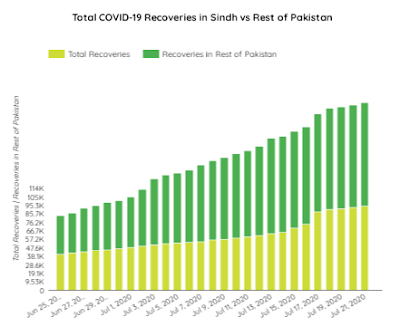 According to the Chief Minister, with 22 more deaths of the coronavirus infected patients, the overall tally of COVID fatalities has reached to 2,041.

However, neither he nor the provincial health department gave any district-wise breakdown of the newly occurred deaths.

As per a federal government dashboard, Sindh had witnessed the maximum 14,027 patients having recovered from COVID-19 on July 17, which gradually decreased to 1,365 on July 21. 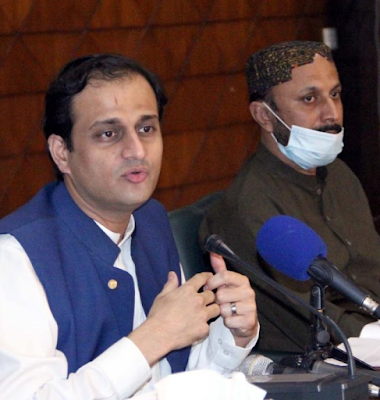 Meanwhile, addressing a press conference on July 21, the spokesperson of Sindh Government, Barrister Murtaza Wahab, observed that the spread of COVID-19 was being controlled with the cooperation of the people of Sindh.

“The Sindh government’s strategy to curb the spread of corona has been successful,” he added while presenting the statistics of people infected with the corona virus.

According to him until July 21, the number of cases of coronavirus was about 113,000 while the number in other provinces was very low.

He added that 450,000 tests have been done in Sindh while Punjab which has many times more population than Sindh has undergone about four lakh corona virus tests.

“Sindh also has a high recovery rate among patients infected with the corona virus. Eighty two per cent of patients have recovered in Sindh, while the number is much lower in Punjab and other provinces,” he pointed out.

He further said that the death rate of patients from COVID-19 was also lower than all other provinces in Sindh.

“The statistics show that the Sindh government’s strategy regarding coronavirus has been successful,” he reckoned–PNFS