KARACHI: Sindh, now the most affected province due to coronavirus (COVID-19), reported yet another 817 new cases, with 12 more deaths, including four those of women, on May 15.

According to the federal government COVID-19 dashboard, Sindh, with its total of 14.099 cases,  has become most infected province due to coronavirus, followed by Punjab (13,914). Only on May 14, Punjab with 13,561 cases was the most affected province of Pakistan, followed by Sindh (13,341).

In the meantime, a UN report said, “Pakistan sees a record jump in COVID-19 cases only days after the reopening of markets, as blatant violation of the government’s standard operating procedures (SOPs) continued despite repeated warnings by the relevant authorities and sealing of some overcrowded shopping areas.” 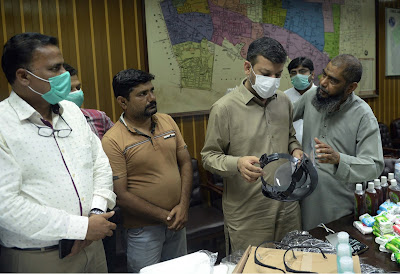 According to a Sindh Health department daily coronavirus summary, the number of cases in Sindh rose to 14,916 by May 15 8.18 am, with a total 255 deaths.
It is estimated that the percentage of women infected by the virus stands over 26 per cent, against over 73 per cent that of the men.
According to the daily summary, Karachi reported 535 new cases, followed by Larkana (57 cases), Sukkur (23), Khairpur (22), Kamber Shahdadkot (19), Ghotki (16), Sanghar (12), Hyderabad (11), Jacobabad (8), Jamshoro (3), Shaheed Benazirabad (3), Shikarpur (3), Tando Allahyar (2) and Tharparkar (1).
Karachi reported seven new deaths due to coronavirus, including five men and two women. The ages of the deceased men ranged from 35 to 70 years while both the two women were 75 years old.
Another three patients, a man of 55 years and two women aged 35 and 64 respectively, lost their lives at Hyderabad while Sukkur reported death of a 55-year old man.
The summary also counted death of a 22-years-old man, terming him an out-of-province patient. However, authorities did not provide information about his hospitalization and presence in Sindh.
Despite requests, PNFS could neither get the names of hospitals where the 12 patients died nor any brief on their medical history.
As many as 113,393 samples have been tested in Sindh so far, according to the health department. Another official report, updated on May 15, said that a total 156 COVID-19 patients admitted to government and private sector hospitals could not survive their illness.
Jinnah Postgraduate Medical Centre (JPMC) has reported deaths of 31 patients, followed by DUHS Ojha Hospital (29), Aga Khan University Hospital (24), Indus Hospital Korangi (19), SIUT (23) and other hospitals–PNFS