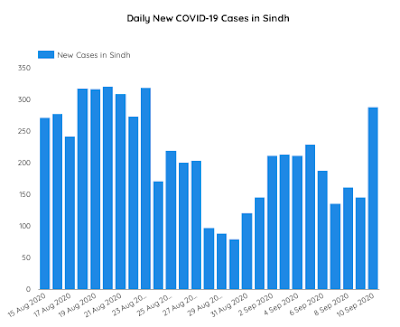 Following addition of the new cases, Sindh’s average figure of daily infections rose to 194 per day during the week ending on September 10, against average 137 new cases per day during the week up to September 3.
On September 10, the province registered the highest one day’s number of infections (289) since August 23 when the daily case tally was 319.
Keen observers remarked that the disease was still to give a trend for Sindh while other provinces appeared content.
The infection was prevailing in the province and its count increased as the number of tests was increased.
According to the national COVID-19 dashboard, Sindh’s number of tests increased by 40% on September 10, compared to the preceding day’s figure. On average 9,895 samples were collectively handled by COVID-19 laboratories per day across Sindh during a period from September 4 to 10.
The district wise breakdown of new cases came as: Karachi (198; 69%), Thatta (16), Hyderabad (15), Badin (14), Sanghar (3), Tando Mohammad Khan (3), Ghotki (2), Kambar Shadadkot (2), Larkana (2), Sukkur (2), Tando Allahyar (1), Jacobabad (1), Jamshoro (1), Naushero Feroze (1), Shaheed Benazirabad (1), Shikarpur (1) and others–PNFS