KARACHI: Despite increase in coronavirus (COVID-19) testing facilities the average daily tally of new cases in the interior districts remained almost unchanged as the health authorities on May 17 confirmed another 156 cases, with four related deaths, in the districts outside of Karachi.
During the week ending on May 17, the districts other than those of Karachi, have reported on average 146 new cases, in comparison of 136 of the preceding week (May 4 to 10). The districts in all have reported 3,822 (23% of the total) infections, in comparison of 12,555 (77%) cumulatively reported by six districts of Karachi division since February 26 when the COVID-19 outbreak was confirmed in Sindh. 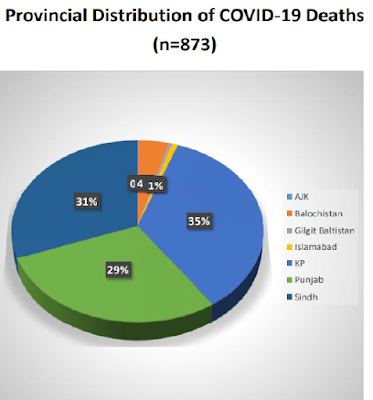 The lethal virus originating from China had infected the entire districts of Sindh by April 26.
The tally of coronavirus positive cases in Sindh reached to 4,956, including 3,524 reported in Karachi, with 85 related deaths, on April 27, while another milestone of 10,771 cases, including 8,051 Karachi, with 180 deaths were recorded on May 9.
Sindh’s tally of cases jumped to 15,590, including 11,924 from Karachi, with 268 deaths on May 16, according to official sources.
The experts, taking note of considerable difference in the infection rates of Karachi and the remaining districts, attributed it to the non-availability of the virus testing laboratories in the interior parts of the province.
Sindh needs to reach out for more and more hidden infection cases timely in the interior as well, otherwise it will become difficult further for the authorities to contain the diseases in any shortest possible time, they added.
The official sources maintained that Sindh in all has 16 designated coronavirus testing laboratories in the public and private sectors, including two at Hyderabad and one at Sukkur.
According to the Sindh health department routine summary, new infections were reported from Shikarpur (31) Sukkur (25), Larkana (25), Hyderabad (16), Ghotki (14), Kambar Shahdadkot (13), Sanghar (10), Khairpur (6), Jamshoro (3), Mirpurkhas (3) and Badin (2) while Sujawal, Thatta, Matiari, Kashmore and Jacobabad reported once case each, in addition to 631 cases reported by Karachi.
The department also confirmed deaths of five COVID-19 patients, including a woman at Karachi during the last 24 hours ending at 8 am on May 17, whose ages ranged from 30 to 75 years. In addition, two patients, including a woman, in the age brackets of 49 to 53 years, died at Hyderabad while a 40-year-old woman lost her life at Sukkur and another women, aged 45 years, died in Matiari, taking the overall death toll to 277 for the province on May 17.
However, the official summary did not mention the place of deaths of the patients in question, nature of diseases and their treatment period in the hospitals or homes.
So far, according to a report, 206 patients have died at 16 public and private hospitals across the province, including JPMC (36), DUHS Ojha (35), SIUT (34), AKUH (31), Indus Korangi (24), CHK (18) and others. About remaining deaths it’s being assumed that those occurred at homes of the deceased patients since no official statement about their deaths was made available.
As many as 5,034 samples were tested during the last 24 hours against the cumulative capacity of testing 6,550 samples, with an overall positive rate of 20 percent.
A maximum 45% positivity rate came from the South City Hospital, followed by SIUT (44%), CHK (29%), Indus Korangi (29%), DUHS Ojha (24%), KU-PMDC (23%), AKUH (23%), Liaquat National (21%), PNS Shifa (195) and others–PNFS