KARACHI: The ventilator occupancy rate in COVID-19 health facilities in Sindh stood at six percent on August 21 when authorities concerned confirmed registration of 310 more new cases, with seven related deaths during the last 24 hours. On August 21, as per an official report, 542 beds with ventilators were available for COVID-19 patients across the province, out of which only 32 were occupied. 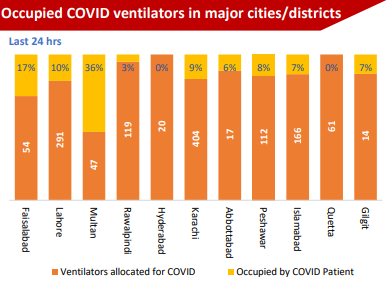 The average occupancy of intensive care beds with ventilators remained 46 during August.
The entire load of patients on ventilators was equally (16 each) borne by groups of public and private sector hospitals located in Karachi viz CHK (5), Karachi Trauma Centre (3), JPMC (2), SIUT (3), Lyari General (1), Infectious Diseases centre (1) and PNS Shifa (1), Indus (9), AKUH (4) and LNH (3) on August 21.
The number of patients put on ventilators ranged from 44 to 64 in the first week of August, 38 to 45 in the second week, while 37 in the week ending August 21.
The Sindh Chief Minister, Syed Murad Ali Shah, in his routine COVID-19 statement, shared that there were 4,450 active patients across Sindh on August 21 afternoon, out of which 4,139 stayed at homes, 312 at hospitals, with 223 being critically ill.

The total of COVID-19 fatalities across the province rose to 2,357, according to him.

Official reports revealed that five patients, who died on August 18, three of them expired at Karachi and one each at Dadu and Hyderabad which included one death at home; another three patients died at home on August 20.

A total of 30 patients have lost their lives at home in the country during the month of August, majority of whom belonged to Sindh, according to data.