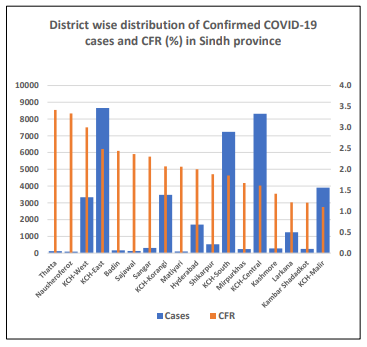 KARACHI: Amidst the developing general perception that the COVID-19 specific hospitals in Karachi were not delivering up to the mark, the experts in medicine and public health have suggested establishment of a short-term independent supervisory body on an emergent basis to ensure amended care providing in the case of moderate and severely ill coronavirus patients.

The experts reached by this scribe were requested to examine the reservations that Karachi was enduring frequent deaths of citizens infected with COVID-19, including male and females of all age groups and from all income strata, reportedly due to certain lacking on the part of healthcare settings, both in the public and private sectors. 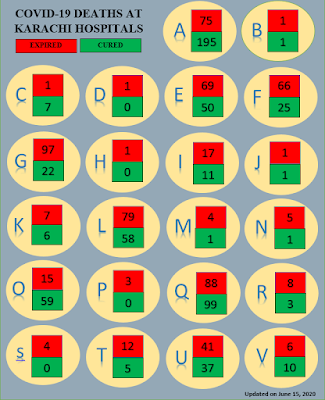 The megapolis, which, as per the common opinion, houses the top health facilities of the country, has already witnessed over 600 coronavirus fatalities in the last three months at government and private hospitals, which admitted a total 2,623 corona patients during last three and a half months or so.

The Jinnah Sindh Medical University (JSMU), Vice-Chancellor Professor S M Tariq Rafi, commented that globally only symptomatic treatment was being given to COVID-19 patients as the disease had just been discovered with no set treatment existing.

“Our doctors are also managing the disease by treating symptoms in light of globally recommended guidelines,” he remarked, adding that the death toll was not attributable to bad medical management. 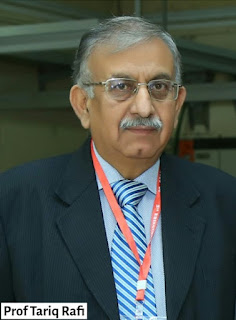 “The rising number of the virus cases had regularly been predicted from time to time and the projections included substantial deaths along with recoveries.

However, the professor noted that the rising figures of fatalities pointed to the inadequacy of healthcare sector of Karachi in reference to number of available beds and intensive care unit facilities in proportion to the population.

Dr Naseem Salahuddin, head of infectious diseases department at the Indus Hospital, observed that COVID-19 was a dynamic infection and the last word might not be written for a long while.

“Infectious diseases can behave differently in different populations due to inherent variations in ethnicity, immunity, climate and presence of comorbidities. We will understand the disease better in our part of the world when data emerges from the subcontinent where we have many similarities,” he opined. 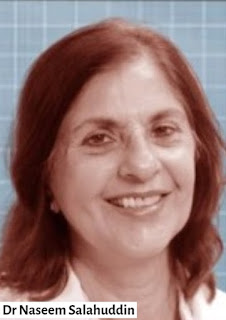 Responding to the question that whether the care providers at both the public and private sector hospitals at Karachi were up to the mark, she said that care to COVID-19 patients was the best wherever there was commitment from the hospital administration, along with infectious diseases specialists, pulmonologists, intensivists and anesthesiologists. “Hospitals with robust training programmes with these specialists are best placed for good care.”

She remarked that a committed hospital administration will motivate its nurses and technicians. “Private hospitals without training programmes or with a dearth of specialists will place commercialism before care.”

When asked that hospitals in Karachi may take more time to understand the clinical and management aspects of corona diseases, Dr Naseem Salahuddin said that the care-providers needed to learn to separate the urgent from less urgent cases; who needs what tests; how to interpret tests.

“Availability of supportive care such as oxygen, operation of ventilators, drugs that are considered useful such as tocilizumab was also among the issues that need to be addressed.”

She continued that the communication and counseling skills of doctors, nurses and administration can help smooth functioning and more understanding from patients and families. 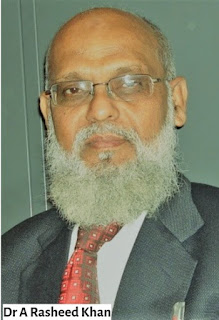 Prof Abdul Rasheed Khan, a senior cardiologist, expressed the view that coronavirus was spreading like anything, reasons behind included little sense of severity of the disease among the masses, lot of conflicting opinions of the politicians, policy statement of non-qualified persons, paying no heed to qualified persons’ advices and inappropriate and foolish decisions taken in the initial phase of the sickness.

On the subject of patient management, he said that there were no rocking signs as far as the management was concerned since there was no definite treatment established yet. “Only hit and run is being done.”

He continued that, as far as some private hospitals were concerned they were trying to manage according to guidelines being posted off and on in different world health societies.

“It was not the capacity or capability of a doctor but the resources available to him or her mattered, like medicines, which have been recommended for palliative treatment are either not available or too expensive to be bearable for middle class or poor patients. It is the duty of regulatory authorities to just follow international guidelines and pass onto medical community with honesty,” Dr Rasheed Khan, who has a long experience of serving at both the public and private health settings, explained.

A pharmacy and management expert by qualification, Syed Jamshed Ahmed, working as Deputy CEO at a pharmaceutical firm, felt that both the federal as well as the provincial government of Sindh were ignorant of the facts and ground realities and as such citizens were bearing the brunt of their failures.

“They did not make any effort to rescue the people of the country in their emergency health condition,” he regretted, adding that little was known about any serious and broader consultations between the health ministers and other stakeholders including the hospitals. 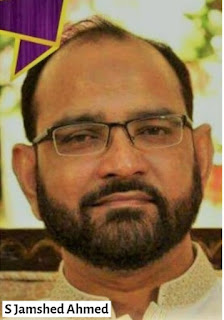 “We could not have any strategy identifying the role of public and private sector hospitals in Karachi. Had that been ensured earlier, the service delivery scenario would have been different and largely soothing for COVID-19 patients,” he reckoned.

By taking the public sector hospitals on board almost half of the wards could have been converted into COVID treatment facilities, he added and remarked that the government was still in a position to take a full-swing action and reassess the situation, particularly when forecasts were being made about many more cases and resultant fatalities in future.

He opined that hospitals were not able to handle the patients, who suddenly swung from mild to moderate and severe health conditions. “Such patients need a timely medical support of 24 to 48 hours just to avert unnecessary deaths.”

Jamshed Ahmed, one of the experienced hands in the pharmaceutical industry, suggested for formation of a central command of all the hospitals in Karachi, involving chief minister, health minister and medical stalwarts and other associated figures to have a flawless rescue plan realizing the COVID-19 emergency, targeted at saving the patients from succumbing to the lethal virus.

“We have failed to contain the spread of the disease but we need to work sincerely now for delivery of improved life-saving medical services at hospitals.” 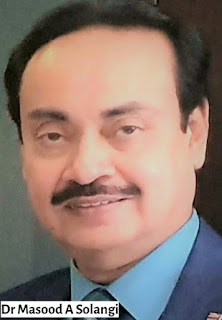 Dr Masood A Solangi, former Director General of the Sindh Health Services and a public-health expert, said that since the COVID-19 was a new emerging disease, our healthcare providers should have undergone refresher training on the diagnosis and clinical management of such cases.

New courses and updates for the serving professionals were hardly ensured in our part of the world, he added, saying that a provincial health development centre was established way back in early 1980s but it was lying dormant for last many years.

The ex-government official attributed the absence of training to the inadequate management of the COVID-19 cases in the government hospitals.

“As far as private hospitals are concerned many of them are actually business establishments, rather than health care services, minting money from the people, with no accountability or any check and balance. After a long awaited legislation, a health care commission was established to regulate both the privately run and public hospitals but its existence is hardly felt, particularly after the onslaught of the lethal virus diseases in the province,” he said.

Dr Muhammad Khalid Shafi, General Secretary, Pakistan Paediatric Association (PPA), Sindh chapter, stated that one-third of positive coronavirus cases of Pakistan were in Karachi where now almost every one hour one person was passing away due to the disease. 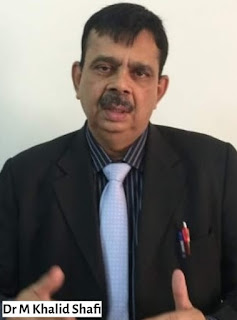 “At hospitals COVID beds are full. Doctors are running from pillar to post in arranging beds in the designated wards, oxygen cylinders and pulse oximeters which are now almost not available. We are not prepared to cope with situation,” he conceded.

According to him, the medical community tried their best to stop this clearly visible disaster but the state was never seemed serious for meeting the challenge.

“Health and safety of citizens was never a priority as far as Karachi is concerned. It looks no one is really worried or concerned with the morbid situation here,” he added.

Dr Khalid Shafi didn’t mince words in stating that initially private hospitals were excused for providing the COVID-19 related services but medical community stressed the government to involve them as dynamic of heath delivery system was different in Karachi than other parts of Pakistan as people relied and trusted more on private set ups, in comparison to the government hospitals, which, according to him, were not up to mark.

However, he noted that the charges of privately-run hospitals were not proportionate, they should charge but some limits should be there. “Sorry to say many of the private hospitals have made COVID-19 diseases a source of earning.”

Criticizing the government’s COVID-19 strategies, the PPA leader said that hospitals in Karachi did not need ventilators rather they needed high dependency units with oxygen modulations.

“Not less than 2,000 beds should be readied in Karachi only. We kept running for ventilators without realizing that operating ventilator needed extra expertise,” he mentioned, believing that the government had failed to decide priorities.

He lamented that deaths due to COVID-19 were now frequent and it was being speculated that many more deaths had taken place because of this virus but those were not included in data as deceased patients were not tested timely.

Syed Irfan Ahmed, a researcher and communication strategist, associated with a pharmaceutical establishment, mentioned that Karachi, a populous city of more than 20 million people, 15 government, private and charitable hospitals, was trying to grapple with the reporting cases of coronavirus.

“The official figures state that these hospitals collectively house around 136 ventilators. As the number of cases surges hospitals will soon run out of their capacity. For example, an official of a private hospital confirmed recently that his facility is already running at its peak capacity.”

He also referred to a recent statement of Dr S M Qaisar Sajjad, Secretary-General of the Pakistan Medical Association (PMA), highlighting that June and July were very crucial as a sharp rise in already fast-increasing coronavirus cases was expected during these two months in the country.

“Further, the shortage of trained medical staff is adding to the worsening situation. Our hospitals can handle the situation only when reported cases are under the manageable limit but the overwhelming number of cases would certainly test the fragility of our already frail health system,” Irfan Ahmed elaborated–PNFS