KARACHI: The Sindh public sector health facilities, faced with severe shortage of life supporting machines and equipment, may start receiving ventilators at the beginning of the new fiscal year, this emerged on May 29.

At a meeting of the Sindh Coronavirus Emergency Fund Committee meeting, chaired by Chief Secretary Syed Mumtaz Ali Shah, Director General of the Provincial Disaster Management Authority said that 100 ventilators, previously ordered, will be received by June 25 this year.
Giving various approvals of new procurement under the emergency fund committee, the Chief Secretary, who heads the committee, told the meeting that an amount of Rs 1.5 billion has so far been spent out of a total of Rs 3.61 billion collected in the fund.
In the meantime, the committee approved a sanction of Rs 466 million coming from the budget of Provincial Disaster Management Authority (PDMA) for purchases of 168 ventilators, while another Rs 237 million were approved for procurement of laboratory equipment besides other machinery and medical equipment. 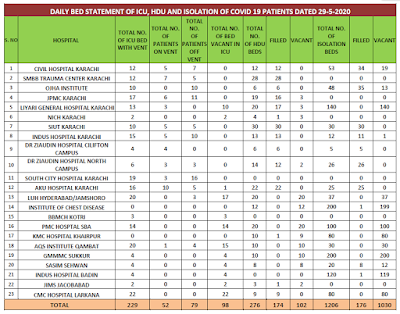 Mumtaz Ali Shah said that the medical equipments were being purchased for the field isolation centers established at the Karachi Expo Centre and PAF Museum and other hospitals of the province.
He further said that the ventilators would be installed at different government hospitals.
The Chief Secretary directed the Secretary Health, Zahid Abbasi during the meeting to establish coronavirus wards at the Sindh Government Hospitals in Korangi and New Karachi apart from Qatar Hospital in Orangi Town and the KMC-run Abbasi Shaheed Hospital.

He also reviewed the progress on upgrading the ICUs and HDUs in public sector hospitals of province and inspection and audit of the medical equipment being delivered to hospitals.

Meanwhile the Pakistan Medical Association (PMA) expressed its concern over the increasing number of deaths of doctors in the country due to coronavirus, mentioning the deaths of doctors within the last 24 hours, Dr Sana Fatima from Lahore and Dr Zubair Ahmed from Quetta and  Dr Naeem Agha, also in Quetta.

“Protection of doctors is a very serious issue and we have been continuously raising our voice for the protection of doctors. We have written letters to the Prime Minister of Pakistan and to the Chief Ministers of all provinces,” Dr S M Qaiser Sajjad, PMA Secretary General, observed in a statement on May 29, adding that there were flaws due to which doctors continued suffering.

Anticipating a further worsening of COVID-19 situation in the country the PMA leader noted that, with the increasing number of patients, the government should increase the facilities at hospitals.

“The quantity of trained staff, beds, ventilators, C-pap and Bi-pap (non-invasive ventilation machines) should be increased at all corona designated hospitals,” he urged–PNFS