By Mukhtar Alam:
Amidst apprehensions that authorities have stopped conducting coronavirus tests among population in the interior districts, the Sindh health department, on April 13, announced a two-prong action plan to check people belonging to tableeghi jamat in various districts of Sindh. 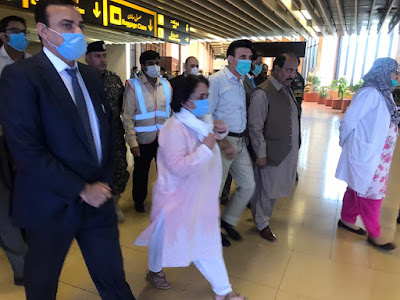 The Sindh Health Minister, Dr Azra Fazal Pechuho in a statement said that health department has started a process from April 13 to screen around 1,950 people from tableeghi jamat located in 12 districts.
The screening, as per the given protocols, will be completed in a week time, she added, saying that majority of tableeghi jamat members were elderly and vulnerable to the virus and they must be saved from the corona disease.
As per the plan as many as 241 people will be screened at Hyderabad, while another 248 at Tando Allahyar, 128 at Umerkot, 307 at Nawabshah and 66 at Jamshoro in the first phase.
An information officer of the government said that the initial examination and screening will determine that who should be tested against the virus.
Earlier, the screen exercise was done in the case of tableeghi jamat members at Hyderabad, which yielded 91 corona infected cases, the officer added, saying the results of tests at Hyderabad has led the health department to ensure screening of other members of tableeghi jamat, which will help contain the coronavirus infections and give due treatment to the infected people in the interior of Sindh.
According to him, the next round of screening will be carried out on 105 tableeghi jamat members in Tando Muhammad Khan, 222 in Dadu, 44 in Matiari, 231 in Naushero Feroz, 242 in Thatta, 105 in Badin, 128 in Umerkot.
Earlier some observers had been airing concerns that the health authorities were focusing largely on Karachi, while interior districts were being ignored, despite the possibility of spread of the virus through the not-reached pilgrims and tableeghi members. It was also stressed that government should enhance its testing facilities in other parts of the province.
In the meantime, the Sindh Institute of Urology and Transplantation (SIUT) has screened about 5,030 patients at its Coronavirus Clinic started on March 18. Of the 615 tested 154 were found positive for coronavirus, while 250 negative. The results of the remaining tests are awaited, an official of the institute disclosed on April 13.