KARACHI: Sindh, after five days of reduced COVID-19 testing of samples, witnessed a big stride in the activities on June 27 when authorities in the government declared detection of 1,949 (16%) new positive cases out of 11,901 tests, with new 38 related deaths, taking the number of infections to 78,267 and fatality to 1,243 in the province.

In the meantime, keen observers expressed their concerns over the reported reduced field activity, including that at the COVID-19 testing laboratories, while the provincial health department resorted to keeping silent.

The Sindh Chief Minister, Syed Murad Ali Shah, in his routine COVID-19 situation statement, informed that as many as 426,149 tests have been conducted by the laboratories during the last 24 hours ending at 9 am on June 27, out of which 78,267 (18.36%) were declared positive for the virus.

“There are at present 33,580 active coronavirus cases, while number of those recovered is 43,444. As many as 1,375 are hospitalized, including 696 in critical conditions,” he disclosed.

He further said that another 38 COVID-19 patients had lost their lives across the province. However, his statement did not include the details of cities which endured the deaths of patients while the provincial health department officers also failed to provide the coronavirus data and summary, including details of deaths, to media professionals. 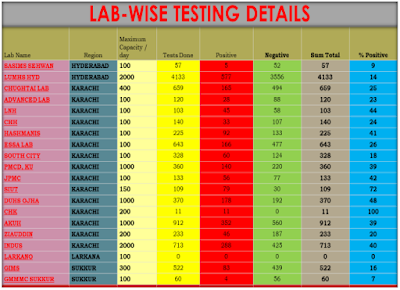 In the meantime, an official report mentioned that 19 laboratories performed 9,831 tests, during the last 24 hours, against their collective capacity of doing 9,150 tests every day. The report gave to understand that the testing capacity of different laboratories have been revised lately.