Sindh reported three more deaths due to coronavirus infection in Karachi, while the daily rate of the viral infection reached 15.25%, the highest of all days when 340 new cases were reported across the province.

According to Sindh health department data, samples from 2,097 suspected patients were tested during the last 24 hours ending April 22 at 8 am, out of which 320 were found positive for COVID-19.
The daily new infection rate has been increasing, particularly when the provincial authorities increased the daily number of tests. On April 21, 2,191 samples were tested in different government designated laboratories, out of which 289 (13.19%) were declared positive, while 182 (11.23%) out of 1,620 tested positive on April 20 and another 138 (9.2%) out of 1,500 tested positive on April 19. 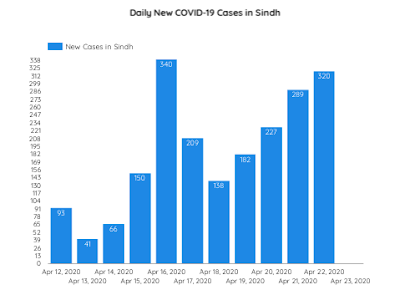 A keen observer said that the recent days’ data were clear manifestation of the fact that the more they are testing the more they are getting the hidden cases of corona virus.
Similarly, the death of COVID-19 patients is also continuing unabated. Three more male patients, ageing 67, 60, 81, respectively died in public and private hospitals of Karachi on April 22. Prior to this, eight people had lost their lives to corona on April 19, five on April 20, and another five on April 21.
The official data of April 22 suggested that coronavirus infection has lately spread to Kambar Shahdadkot also, as such now all the districts, with the sole exception Matiari, of Sindh are in the grip of COVID-19.
A total of 3,337 virus infected cases have been reported since the detection of first coronavirus case of Sindh on February 26, with 69 fatalities that occurred in Karachi, Hyderabad and Sukkur.
As many as 292 new cases of infection were found on April 22 at Karachi, 19 at Hyderabad, four in Kashmore, two at Khairpur, and one each at Kamber Shahdadkot, Shaheed Benazirabad and Ghotki.
In the meantime, in his routine video message, Sindh Chief Minister, Syed Murad Ali Shah, asked the citizens to follow the lockdown measures if they wanted to save themselves from COVID-19. “The tests conducted so far come to 30,346 against which 3,373 cases have been detected,” he informed.
Talking about local transmission of the infection, he said that 308 new cases were of local transmissions, the highest in the province so far with Karachi being the worst affected with over 1,300 cases.
He stated said that at present, 2,589 patients were under treatment, of them 1,579 were in home isolation, 613 at isolation centres and 379 in different hospitals.