KARACHI: After witnessing a gradual decrease in its new COVID-19 infections for a week, Karachi reported a 120% increase in the number of daily new cases on July 22 when authorities in the government confirmed 1,109 new cases across the province during the last 24 hours, with 19 more related deaths. 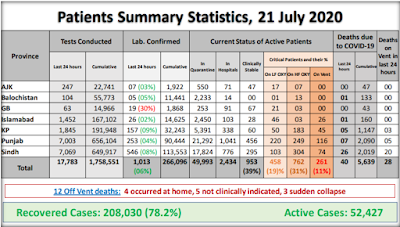 The megapolis has reported an average about 400 new coronavirus cases daily since July 16. It registered 417 new cases on July 16, which increased to 477 on July 17 but gradually declined up to 179 on July 20. The infections increased to 324 on July 21.

He shared that with the confirmation of 1,109 new cases the overall infection tally rose to 115,213 on July 22 for the province. Sindh’s new case reporting percentage came as 11%, against the overall provincial rate of infection of 18%. 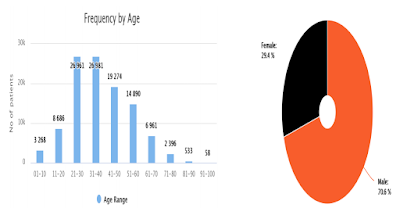 According to the COVID-19 data, as narrated by the Chief Minister, there were 16,927 active patients, including 16,165 at homes, 61 at the isolation centres.

As many as 701 patients were admitted at hospitals, with 495 in critical condition, while 72 were on ventilators.

A total of 96,226 patients recovered across the province so far, including 1,929 who recovered from the diseases on July 22. With the new COVID-19 related fatalities, the overall number of people having lost their lives in the province came as 2,060 (CFR=2%).

However, no detail about the hospitals and districts of the deceased persons was available either from the Chief Minister or the Sindh health department.

The male-female ratio of the infected persons in the province was reported as 70.6% and 29.4%.

Keen observers felt that the overnight doubling of new infections was nothing surprising as the province was not yet out of the epidemic. The more they will go for sampling the suspected cases the more they will get the COVID-19 infections, it was reckoned.

According to an official report, as of July 21, as many as 6,676 samples were tested at COVID-19 laboratories across Sindh, against a collective capacity of 14,850 tests, while 846, including 551 new cases were found positive.

The report further said that till July 21, one patient died at isolation centre, while 1,544 at hospitals across the province. It was further learnt that of the 375 ICU beds at Karachi’s COVID-19 hospitals 71 were occupied by on-ventilator patients, while 107 were having off-ventilator patients on July 21.

According to another report, overall 40 deaths occurred across the country on July 20, including four at-home deaths which were reported from Sindh. It was estimated that about 500 COVID-19 patients died at home or on their way to hospitals in Sindh so far.

Yet another relevant data revealed that in all 518 COVID-19 patients died at homes during a period from May 9 to July 21 across the country, compared to 4,493 deaths taking place at hospitals–PNFS