KARACHI: Sindh, unable to see its COVID-19 curve flattened, got a big jolt again on May 9 when the authorities confirmed detection of 1,080 new infections, an all days’ highest figure in all the provinces and territories of the country. Earlier, Punjab had reported the all days’ maximum 956 new cases on May 7.
Notably, Sindh reported its COVID-19 fatalities as four during the last 24 hours in contrast to the figures of last week, till April 9, when on average, at least eight people lost their lives every day across the province.
In a video message, the Sindh Chief Minister, Syed Murad Ali Shah, informed that in all 5,498 tests were conducted in the province during the last 24 hours ending at 8 am on May 9, out of which 1,080 were found positive for coronavirus, including a bulk new infections reported among the residents of Pir Jo Goth, a rural city in Khairpur district. 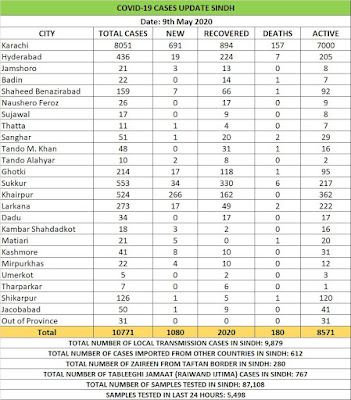 Terming the development a dreadful eruption of the virus, the Chief Minister disclosed that 246 new cases were found in a day in Pir Jo Goth.
“Earlier on May 4, total number of 10 people were diagnosed as coronavirus positive after 35 people were tested while another 14 cases had popped up on May 6 when 97 other villagers were tested,” he added and expressed the suspicion that this local spread took in the area after death of a woman having the history of traveling to Hyderabad, who died before any testing for coronavirus.
“At Karachi we have conducted some tests among people including the shopkeepers and vendors, at various shops and found some COVID positive cases.” he continued, describing it as a dangerous sign and demanded of the people to shun the lax attitude and not to go outdoors unnecessarily.
He said that 101 of the patients (17.2%) were in critical condition, including 23 those who were on ventilators.
In the meantime, according to the Sindh health department daily coronavirus summary, three patients, aged 27 to 70 years, including a woman died at Karachi, while a 45-year-old man died at Hyderabad.
An official source said that three of the patients died at hospitals, Jinnah Postgraduate Medical Centre, Indus Hospital and Liaquat University of Medical and Health Sciences, while another one expired in the home isolation.
The daily summary revealed that a maximum 691 new cases were detected in in Karachi, while another 266 in Khairpur, Sukkur (34), Ghotki (17), Larkana (17), Kashmore (8), Shaheed Benazirabad (7), Matiari (5), Mirpurkhas (4), Jamshoro (3) and Tando AllahYar (2). Thatta, Sanghar, Shikarpur and Jacobabad reported one case each.
As many as 5,489 tests were conducted, pushing the total number of tests to 10,771 across the province. Another 80 patients recovered from illness, taking the total of the cured patients to 2,020–PNFS