KARACHI: Amidst reports that various most affected cities of Pakistan have witnessed significant decrease in their daily number of new of COVID-19 infections in recent days, Karachi reported 42% of the total new cases registered in Sindh on July 26.

Authorities in the government shared on July 26 that Karachi reported 298 of the total 713 new cases in the province during the last 24 hours with 16 new related fatalities, against Pakistan’s 20 deaths. 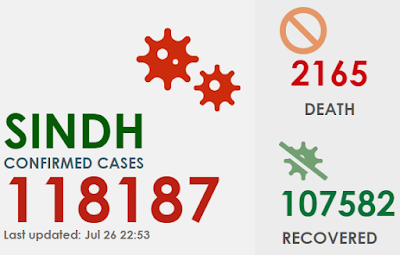 After witnessing a gradual decrease in its new COVID-19 infections for a week, Karachi reported a 120% increase in the number of daily new cases on July 22 when authorities in the government confirmed 714 new cases in the city.
The megapolis has reported an average about 450 new coronavirus cases daily since July 22. It registered 417 new cases on July 16, which increased to 477 on July 17, but gradually declined up to 179 on July 20. The infections increased to 324 on July 21 while 305 on July 23 for a gradual daily increase up to up to 456 on July 25 and then decreased by 35% on July 26.
Keen observers expressed the view that Karachi trend wise was yet to show a stable picture of the epidemic. They attributed the ups and downs in the infection reporting to certain circumstantial issues, including the mobilization of surveillance and intervention teams and infavourable weather conditions. 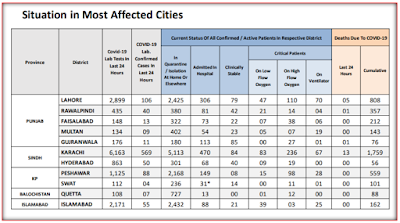 The Sindh Chief Minister, Syed Murad Ali Shah, in his routine COVID-19 statement, urged the people to adhere to the standard operating procedures (SOPs) introduced by the government in the wake of the disease.

He said that 16 more infected people died during the last 24 hours ending on July 26, taking the fatality tally to 2,151 for the province. However, no details about the deceased persons’ hospitalization or residential districts were given in the statement.

He further disclosed that there were 8,634 COVID-19 active patients in the province, out of which 16 were in the designated isolation centres and 418 at hospitals, while the remaining were receiving treatment at homes. 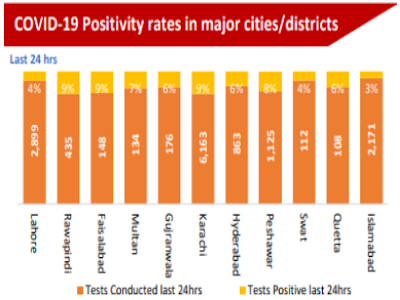 As many as 415 patients are in critical conditions, he added, saying the number of people infected with the lethal virus reached to 118,311 on July 26.

In the meantime, the Sindh health department’s website, updated around 9 pm on July 26, showed the total infections in Sindh as 118,187 and number of deaths as 2,165.

Another official report said that as of July 25, as many as 11,009 tests were conducted across Sindh during the last 24 hours, out of which 1,135 were found positive for COVID-19, including 798 new infections. Many of the Karachi based laboratories performed below their capacity, while at least three did not try any sample at all.