By Mukhtar Alam:
Karachi, with 1,003 confirmed cases, was the second city, after Lahore, in the context of coronavirus in the country having reported a total 5,837 cases so far, with 96 deaths. 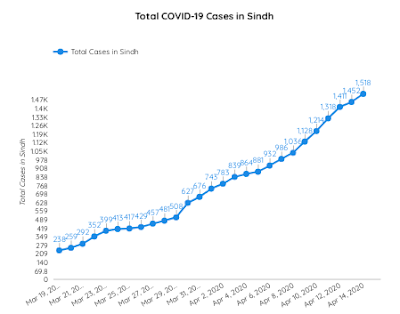 The district administration of Karachi Malir on April 14 ordered immediate closure of outpatient departments in all the public and private hospitals and clinics within the district in the wake of increasing number of COVID-19 cases at UC 1 to 5 of Landhi till further order.
Meanwhile the provincial health department data, released on April 14, revealed that there were 1,056 cases of coronavirus undergoing treatment in Sindh with the break-up being Karachi (819), Hyderabad (169), Larkana (16). Khairpur (14) and Tando Mohammad Khan (12) while there were 26 cases in other 10 districts.
Until April 14, as many as 14,503 people were tested in Sindh, out of which 1,518 tested positive for the virus, out of which 35 lost their lives. A Sindh health department summary of cases said that in all 66 new cases were confirmed, all at Karachi.
The authorities also confirmed four coronavirus related deaths in Karachi on April 14, two males aged 40 and 62 years, respectively, and two females aged 64 and 53, respectively, taking the provincial tally of corona deaths to 35.