KARACHI: Yet another 17 people, including five in the age brackets of 15 to 48 years, died due to coronavirus infections in the last 24 hours in Sindh where such deaths spiked at the quickest rate in a span of 10 days, according to Sindh government COVID-19 reports.
The province, enduring the coronavirus related deaths unabatedly, reported 127 deaths from May 11 to 20, pushing the Sindh tally of such deaths to 316, out of 18,964 cases, against 1,002 deaths out of 46,915 confirmed COVID-19 cases country wide since the outbreak of the disease on February 16. The numbers of deaths and new infections doubled in 14 days and 13 days respectively with almost same rates. 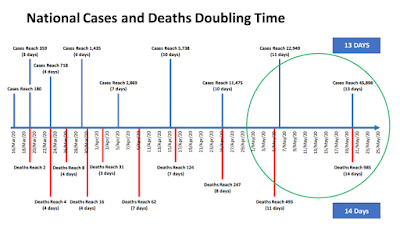 Though the Sindh health department has stopped providing details of patients’ circumstances and names of hospitals where they lost lives, it’s being reported that the majority of the patients died on ventilators during the last 24 hours.
A department’s summary revealed that 12 patients including five women died in Karachi, aged 18, 20, 48, 58 and 65 years respectively while the deceased men’s ages were 46, 55, 57, 58, 58, 70 and 74 years respectively.
At Hyderabad, two men of 57 and 68 respectively lost their lives while Shaheed Benazirabad, Badin and Mirpurkhas reported death of one man each, aged 15, 55 and 59 years, respectively.
As many as 251 patients have so far died at government and private hospitals, including Sindh Institute of Urology and Transplantation (43), Jinnah Postgraduate Medical Centre (42), DUHS Ojha (42), Aga Khan University Hospital (33), Indus Hospital, Korangi (28), Civil Hospital Karachi (21) and others. 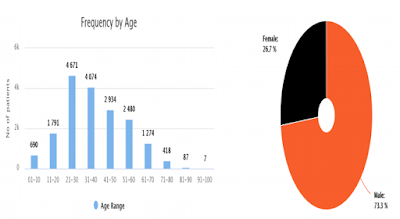 According to a national data, reportedly as many as 52 off ventilator deaths occurred during a period of May 5 to 19 in Sindh; 24 died at home, three brought dead to hospitals, six died as there was no time to shift, while 19 patients died suddenly with comorbid complications.
In the meantime, according to the Sindh health department report, the province witnessed another 1,017 new COVID-19 cases during the last 24 hours at 8 am on May 20.
Karachi reported the maximum 872 new cases followed by Hyderabad (27), Larkana (26), Shikarpur (18), Sukkur (16), Ghotki (16), Badin (8), Kambar Shahdakot (7), Thatta (7), Shaheed Benazirabad (6), Sanghar (4), Dadu (3), Sujawal (2), Mirpurkhas (2), Jacobabad (2) and Kashmore (1).
The man-woman ratio of coronavirus patients stood as 73.3% and 26.3% respectively on May 20 in Sindh.
According to report, another 904 under treatment patients were tested negative, taking the tally of patients having recovered from the disease to 5,645 across the province–PNFS