KARACHI: Sindh on May 27 witnessed a record daily increase in its COVID-19 positivity rates, rising to 32.10%, against the country’s average rate of 17.03% as the health authorities confirmed another 699 new cases of infections with six related deaths.
According to official data, the province’s coronavirus positivity rate on May 21 was at 15.99%, which rose to 23.85 on May 24 and 24.62% on May 26. Various testing laboratories operating in the public and private sectors conducted across the province as many as 2,177 tests for coronavirus during the last 24 hours ending at 9 am on May 27, out of which 699 were found positive.
The guidelines suggest that the World Health Organization (WHO) likes to see countries testing at the level of ten negative tests to one positive, as a general benchmark of a system that’s doing enough testing to pick up all cases. 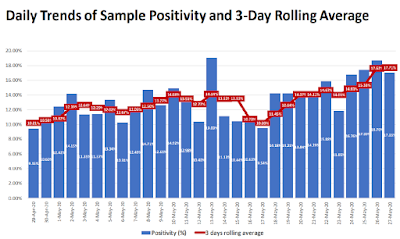 In communities where most coronavirus tests are coming back positive, it’s a sign there are many more cases there that haven’t been found, the WHO officials had briefed in a press conference about two months back.
However, local experts in infectious diseases and public health attributed the test trend to relaxed implementation of lockdown and limited working at the government designated COVID-19 testing laboratories and centres.
Observing reason behind the sudden increase in the rate of new positive cases, Dr Naseem Salahauddin, Head of Infectious Diseases Department at the Indus Hospital, Karachi, said that it was expected after Ramazan taraweeh congregation, shopping in crowds without masks or distancing.
The doctors and hospitals were under enormous pressure, she said adding that the community of doctors could foresee more problems looming ahead.
An internationally acclaimed infectious diseases epidemiologist, Dr Rana Mohammad Safdar, a federal government personnel, remarked that active contract tracing has gone down and resultantly people with high suspicion of COVID-19 and clear signs and symptoms are self-reporting for testing. 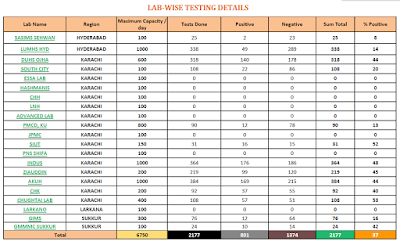 “Active contract tracing activities depleted due to Eid vacations of rapid response team staff, misinformation that the virus is not really a threat and fear of being stigmatized,” he said.
A senior physician Dr Samreena Hashmi, former leader of Pakistan Medical Association, Sindh, reckoned that the overall number of tests has reduced lately as either people only with symptoms were getting tested and no random testing was being done.
Prof M Rafiq Khanani, President, Infectious Control Society Pakistan, felt that the reasons behind the increase in the positivity rate included relaxation of lockdown, development of SOPs in the absence of infection control experts, reduced hours for grocery and other essential services, which resulted in public crowding.
“Disinformation in social media presenting COVID-19 as hoax, propaganda that the disease can easily be cured, and lack of confidentiality of infected people’s information also resulted in people avoiding coming to tests until they have serious disease and have already transmitted infections to several others, most whole family,” he said.
Dr Ashraf Memon, a senior pathologist associated with Kharadar General Hospital, was of the opinion that positivity rate may increase further in the coming two or three weeks.
“The attitude of people in relaxed lockdown days has not been conducive towards containment of the diseases,” he regretted.
Dr M Saeed Khan, Incharge COVID-19 testing labs at Dow University of Health Science, pointed out that during the Eid vacations almost all the testing centres had to face the manpower shortage and as such they tested the highly suspected cases only or those presented to hospitals with the disease’s symptoms.
Since the referral of contract cases for tests from government’s tracking and rapid response personnel to laboratories reduced in recent days, the number of negative cases also reduced, he added, saying if the increase in the rate of COVID-19 positivity rate continues even after three or four days then it would be something more alarming and in line with  the earlier predictions about the disease’s peak.
In the meantime, Sindh is inching to the overall figure of 25,000 coronavirus positive cases, as of 163,805 tests conducted across the province so far, 24,206 were found positive. The death toll came as 380.
According to COVID-19 updates shared by the Sindh Chief Minister, Syed Murad Ali Shah, there are 14,556 patients under treatment in Sindh, including 12,836 isolated at homes.
A maximum of 559 new positive cases were reported from Karachi during the last 24 hours, he added, saying remaining positive cases were reported from Ghotki (24), Sukkur (11), Larkana (10), Mirpurkhas (7), Jacobabad (6), Badin (6), Hyderabad (5), Shikarpur (4), Jamshoro (3), Thatta (2) and other districts.
According to the official data, the district wise breakdown of total reported cases, since February 26, came as Karachi’s six districts (19,322), Sukkur (807), Hyderabad (787), Khairpur (605), Larkana (592), Ghotki (461), Shikarpur (297), Shaheed Benazirabad (191), Jacobabad (177), Kamber Shahdadkot (132), Sanghar (123), Kashmore (75), Tando Mohammad Khan (65), Jamshoro (61), Dadu (52), Thatta (50), Matiari (48), Mirpurkhas (46), Badin (45), Naushehro Feroze (33), Sujawal (32), Tando Allahyar, (27), Tharparkar (11) and Umerkot (11)–PNFS