KARACHI: Sindh’s total number of recoveries from coronavirus has been on rise in recent days but it has failed to witness any significant shrink in gap between active cases and new infections while the authorities confirmed registration of another 443 new cases, against 614 patients cured, with two relevant deaths at Karachi hospitals on May 25.
According to available official data, a maximum 904 COVID-19 patients were cured and discharged from various hospitals across the province, against 1,017 new cases, on May 20, while on average 428 patients were sent to home daily after treatment during a period from May 21 to 25.
Overall, however, the total number of confirmed cases continued to increase at a faster rate, which was tantamount to overburdening the provincial health system for a longer period, said a keen observer. 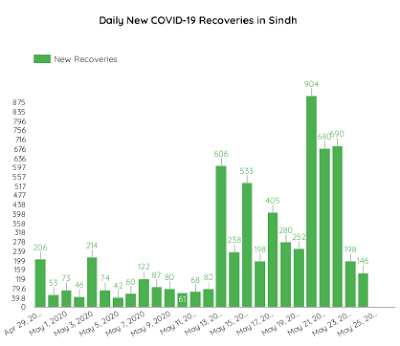 The data showed that only 7,973 (about 35%) of 22,934 patients have recovered from the disease till May 25 in Sindh. There were 17,139 patients below the age of 50, out of which 5,370 (about 31%) could be cured and sent back to homes.
To some observers, the recovery pace of COVID-19 patients under the age of 50 should be higher than the existing one.
“Either many of them are taking extraordinary time to recover from the disease due to their poor medical conditions or their physicians take time before starting any treatment in their cases.”
It was further said that the World Health Organization (WHO) has reported that about 80 per cent of COVID-19 cases globally were mild, which meant that these cases, which usually involved fever, cough and perhaps shortness of breath, recovered without much of an issue.
“The younger, the patient with no other medical complaints, the greater could be the chances of quick recovery while some patients may not even be aware that they are sick.”
The Sindh Chief Minister, Syed Murad Ali Shah, sharing the coronavirus situation report with media on May 25, stated that 443 new cases have been detected by testing 1,852 samples while 614 patients recovered and discharged to their homes.
“This is the first time that the number of patients cured within last 24 hours is higher than the new patients added in our health system,” he observed, while pointing out that due to Eid-ul-Fitr more samples could not be collected like being done in normal days.
He disclosed that with the death of two more patients, during the last 24 hours ending at 8 am on May 25, the death toll has reached to 369, which meant the death rate stemming from coronavirus stood at 1.6% of the total infected people.
However, another source in the government updated this scribe that in all four patients died during the last 24 hours, including two at hospitals and two at home. The ages of the deceased people could not be known.
An official data updated on May 25 said that a total of 300 COVID-19 patients have lost their lives in private and public sector hospitals including JPMC (52), DUHS Ojha (48), SIUT (45), AKUH (37), Indus Hospital (30), CHK (26), Ziauddin Hospital (13), LUMHS Hyderabad (10) and other hospitals while remaining patients died at home or during their shifting to hospitals from home.
According to the Chief Minister, 14,592 patients were under treatment, of them 12,943 (88%) were in home isolation, 790 (6%) at Isolation centres and 859 (6%) at different hospitals.
“Our home isolation experience has worked well because within home atmosphere patients recover fast and our doctors remain in touch with them so that in case of any emergency they can be shifted to hospitals,” he maintained.
As far as the breakup of new coronavirus infections was concerned, Karachi led with 214 cases followed by Larkana (33), Ghotki (23), Sukkur (20), Kambar ShahdadKot (5), Shikarpur (4), Hyderabad (3), Khairpur (3), while Mirpurkhas, Naushehroferoze, Sanghar and Sujawal reported one new case each.
In the meantime, it was also learnt that 347 doctors, 39 nurses and 79 paramedics were included among the people who contracted the virus across Sindh–PNFS