KARACHI: While working at a slow pace the provincial government, yet to procure intensive care related machines and other medical equipment for public sector health units, confirmed unprecedented demise of 30 more coronavirus infected patients in Karachi during the last 24 hours, on May 29, with 804 new infections across the province.
According to the official COVID-19 summary, the overall Sindh’s death toll rose to 427, an average over six deaths every day since March 20 when the province had reported its first such death, while the total number of infections grew to 26,113, out of which 12,750 could recover from the lethal disease.
However, the health department’s personnel, despite requests and queries, did not go beyond death number and ages of deceased patient. 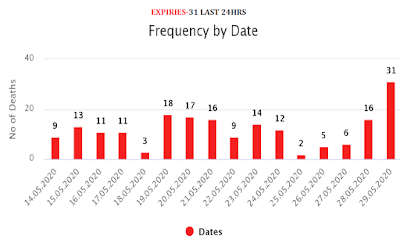 Such a silence over heap of deaths with no provision of hospital names and information about patients stay period at hospitals, their health history and kind of treatment they were given at hospitals and why they could not be saved, in contrary to recent past when the provincial health minister by herself had been discussing every COVID deaths in detail, has confused the citizens as well as the covering journalists.
A senior public health concern, requesting not to be named, said that the recovery rate was increasing but still so many deaths, seemed beyond comprehension and reflected poorly on the quality of treatment and care the coronavirus patients have been getting at the government and privately-run hospitals.
The authorities should ensure a line listing of deaths, which normally includes dates of admission and death; patient name, address, gender and ethnic group; presenting complaint; duration of symptoms; summary of physical examination; and the diagnosis presumed to be the cause of death, he added saying summary of such measures can be released on a daily basis to win the trust of the community in their physicians and care providers, otherwise the official figures will serve just a mind-boggling reference.
A senior microbiologist, Prof Dr Shahana Urooj Kazami, reckoned that the government was yet to attain the right direction to overcome the corona epidemic.

“I am expecting a further increase in the count of infection and death as well as asymptomatic cases in the next two weeks,” she assessed, adding that those who went shopping and other activities during the relaxed lockdown got exposed and the virus was incubating in their bodies (4-14 days’ incubation period) which could lead to another spike in cases.
Another perception was that perhaps the hospitals had lost their craftsmanship and just issuing the death certificates.
The hospitals should be held accountable for every death; there was no active internal/external audit system in the issue of deaths and patient care, therefore it should be outlook of the chief executive of the province now to rectify the affairs at the hospitals, said a keen observer.
According to the data released on May 29, a total of 31 deaths occurred due to corona infection during the last 24 hours, including 30 at Karachi. All deaths, according to the health department personnel, were reported from different hospitals.
At Karachi, eight women who lost their lives were in the age brackets of 30 to 80 years, while 22 men deceased aged between 40 to 88 years. Apart from Karachi, Kashmore district reported its solitary death, an 86-year-old male patient.
Giving a summary of deaths among coronavirus patients across the country, another report revealed that 73% deceased had co-morbidity, 93% deceased remained hospitalized, with average hospital stay of 4.66 days; 57% among hospitalized remained on ventilators, with average ventilator stay of 2.78 days.
It was further learnt that of the 186 admissions at the Aga Khan University Hospital, 43 patients were cured while another 43 succumbed to the lethal disease. Similarly, at the Civil Hospital Karachi 36 were cured, 28 died, out of 131 admissions, at Indus Hospital eight were cured while 35 died out of 89 admitted patients.
At Jinnah Postgraduate Medical Centre 15 got cured, while 57 lost lives, out of 109 admissions; at Dow University Hospital 30 were cured out of 156 admissions while the death toll came as 54. Sindh Institute of Urology and Transplantation cured 31 of the 142 admissions, while 53 died; at Ziauddin Hospital 10 cured, 20 lost life, out of 54 admissions.
Sindh’s 804 newly detected infection cases included 634 from Karachi followed by Hyderabad (37), Sukkur (31), Ghotki (24), Larkana (23), Jacobabad (10), Jamshoro (10), Badin (7), Shikarpur (7), Dadu (4), Matiari (4), Umerkot (3), Mirpurkhas (2), Sanghar (2), Shaheed Benazirabad (1), Naushero Feroze (1), Kashmore (1) and Tando Mohammad Khan (1)–PNFS