KARACHI: Though there was an impression that cases of COVID-19 were on increase again in Sindh, the authorities on October 10. confirmed an almost 50% decrease in number of samples tested for the virus across the province during the last 24 hours.

The Sindh Chief Minister, Syed Murad Ali Shah, in his COVID-19 status statement, revealed that as many as 7,515 suspected samples were examined at different laboratories by October 10 morning, against the collective daily maximum capacity of 14,940 tests.
No reason was given for the reduced testing activities, while the daily new infection rate remained static around 3%.
The designated COVID-19 testing services had handled 11,138 samples during the 24 hours ending on October 9 morning, out of which 376 (3.37%) were found positive for the lethal virus. 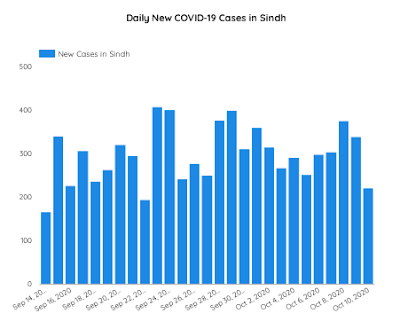 According to the chief minister’s statement, as many as six new relevant fatalities were registered on October 10, while the number of patients actively suffering from the virus stood at 4,787, out of which 4,491 were in home-isolation, six in the isolation centre, while only 289 were hospitalized, including 187 those undergoing the critical phase of their health and 32 put on ventilators.

As far as the breakdown of 221new cases were concerned, Karachi headed the table once with 59 cases (27%) followed by Hyderabad (11), Jamshoro (8), Larkana (5), Sukkur (5), Ghotki (3), Mirpurkhas (3), Shaheed Benazirabad (2), Tando Mohammad Khan (2), Jacobabad (2), Dadu (1), Umerkot (1) and others.
Of the laboratories designated for the coronavirus detection at Karachi, five each from the private and public sector facilities conducted 3,075 tests during the last 24 hours, against 4,440 samples examined by two public sector laboratories at Hyderabad and Larkana.
According to official reports, six deaths registered by Sindh on October 10 included five from Karachi and one from Shaheed Benazirabad. It was learnt that the two persons who lost their lives due to the virus infection on October 9 belonged to Karachi while two of the eight people, who expired on October 8, were reported receiving treatment at homes–PNFS