Coronavirus Update: Country’s more than half infections in Sindh

KARACHI: The share of Sindh in the daily COVID-19 infections reported on September 23 across the country remained almost over a half, with two new related deaths. 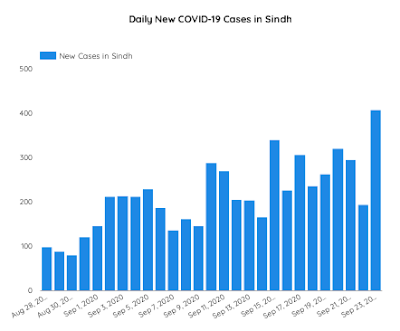 Sindh reported 408 new infections during the last 24 hours ending September 23 morning, against Pakistan’s total 799 new positive cases detected out of 42,299 samples, with five deaths.
The data revealed that Sindh, which was witnessing its daily COVID-19 infection rates fluctuating in recent days, registered a double of the cases recorded on the preceding day.
With the new cases, coming out of 18,360 tests during the last 24 hours, Sindh’s overall infection tally reached to 134,845.
Keen observer said that the province needed to exercise all precaution and apply its medical field forces to trace the lethal virus and detect the carriers well in time. 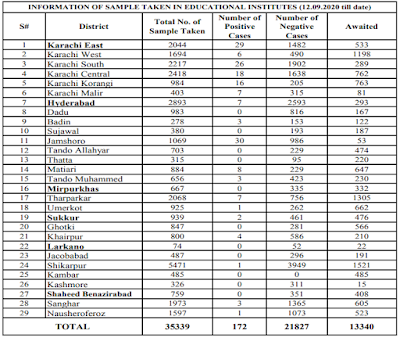 The Sindh Chief Minister, Syed Murad Ali Shah, in his COVID-19 statement on September 23, reported that there were still 3,410 active COVID-19 cases in the province, including 3120 those receiving treatment at homes, five placed in isolation centres and 285 in hospitals.

“As many as 146 were told to be in the critical phase while 17 were placed on ventilators until September 23 morning,” he added.
The two latest deaths were reported from Central and East districts of Karachi, taking the tally of COVID-19 fatalities to 2,471 for the province.
The new infections were reported from Karachi (184), Badin (31), Larkana (6), Ghotki (4), Hyderabad (2), Jamshoro (2), Mirpurkhas (2), Sanghar (2), Shikarpur (2), Sujwal (2), Umerkot (2), Dadu (1) and others.
In the meantime, a report pertaining to laboratory testing of samples drawn from students, teachers and other staff at public and private educational institutions across the province, during a period from September 12 to 22, revealed that as many as 127 samples, out of 21,999 samples were found positive for COVID-19–PNFS