KARACHI: Sindh registered six more COVID-19 fatalities, the highest single-day deaths during the last two weeks, as authorities here confirmed 194 new cases during the last 24 hours, pushing the tally of infections to 134,243 for the province. 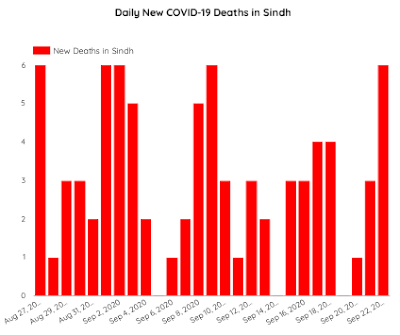 Earlier, according to data, Sindh had reported six deaths on September 1, 2, and 9. Sindh’s six fatalities on September 22 were included in Pakistan’s total 8 of the day, while country’s new number of infections stood at 532.
The Sindh Chief Minister, Syed Murad Ali Shah, in his daily COVID-19 status statement on September 22, shared that a total 13,056 were tested during the last 24 hours, with a positivity rate of about 1.5%.
He added that at present there were 3,286 active patients in Sindh, including 2,930 in home-isolation, five in isolation centre, 351 in hospitals, including critically ill 175 patients, while 20 were on ventilators.
According to the official statement, Karachi registered 134 new cases, followed by Larkana (7), Jamshoro (3), Thatta (3), Sukkur (2), Dadu (1), Sujawal (1) and others–PNFS