KARACHI: Sindh, with its fluctuating daily COVID-19 infection rates, registered three of the four related deaths reported in the country on September 21 when authorities here confirmed 296 new infections, out of 15,211 samples, during the last 24 hours. 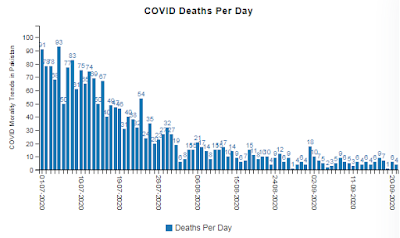 Pakistan’s fourth COVID-19 fatality of the day was reported from Punjab, which had 59 new cases on September 21.
Sindh registered an average 284 cases daily during the week till September 21.
The daily new case numbers ranged from 227 to 341, while its total positive case tally came as 134,243.
The Sindh Chief Minister, Syed Murad Ali Shah, in his statement related to the COVID-19 status, shared that as many as 128,494 patients had recovered from the diseases, while 3,286 more, including 2,930 in home isolation, five in isolation centres and 351 in hospitals, were receiving treatment for the disease. 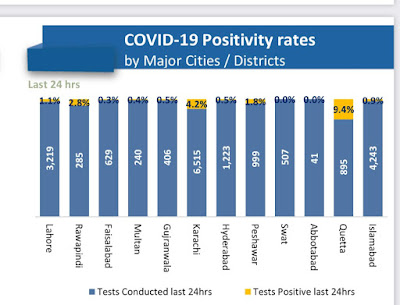 He further stated that condition of 175 patients was stated critical while 20 were put on ventilators, as of September 21.

According to official data, six districts of Karachi division reported 143 new cases, followed by Badin (25), Hyderabad (5), Matiari (4), Shikarpur (3), Sanghar (2), Shaheed Benazirabad (2), Umerkot (2), Dadu (2), Jacobabad (2), Larkana (1) and Sukkur (1).
The fluctuation in cases, particularly in the province of Sindh, has caused alarms and people have been under some kind of pressure in performing their duties at a time when almost every business activity has resumed–PNFS