KARACHI: Sindh, which had been able to see its overall COVID-19 infection rates stable in the recent days, witnessed no reduction in its prevailing rate of relevant deaths as the health authorities here confirmed on April 28 that another seven virus infected patients, including three females, lost their lives at Karachi and two districts of the province.

Apart from the overall death rate, keen observers noted that Sindh showed the death rate on average 1.91% in seven days, from April 21 to 27, when 24 people died of COVID-19 in hospitals and homes. 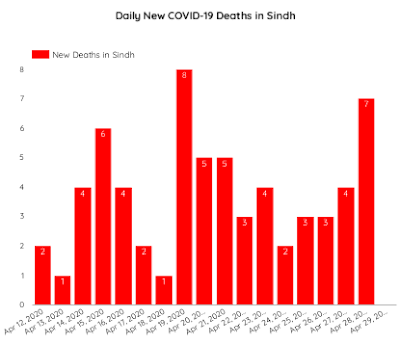 The disturbing fact is that Sindh reported seven deaths on April 28 again, said an analyst, commenting that such deaths, mostly including the senior citizens, obviously made one feel that hospitals were upset due to continued presentation of coronavirus cases.

“They were yet needed to improve their patient filtration points for a timely detection and treatment of patients and strengthen their critical care units and staffs,” the expert commented.

According to the health department, four COVID-19 patients died at Karachi, two females aged 66 and 24 years, respectively, and two males aged 69 and 56 years, receptively. Sukkur reported deaths of two men aged 66 and 56 years, respectively while Matiari, where for the first time two infected cases were reported on April 26, declared its first death due to coronavirus, a woman aged 66 years.