KARACHI: At a time when Sindh is about to complete the declared coronavirus (COVID-19) lockdown period, it reported a record 404 new infections cases for a day on April 29, with eight relevant deaths, including two of women. Earlier, the province had reported an all days’ maximum 383 new COVID-19 infection cases on April 26.
A study of data suggested that Sindh had an increase of 53% in its number of daily tests on April 28 in comparison of April 23 number of tests but it showed its overall COVID-19 infection rate stable around 11%. Its daily new infection rate ranged from 8.14% to 10.64% during a period from April 23 to 28, according to the provincial coronavirus data. 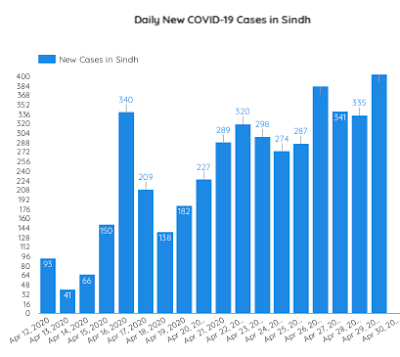 Sindh’s overall infection rate was found 10.99% on April 29 at 8 am, with a total 5,695 positive cases among 51,790 people, including pilgrims, tableeghi jamat members and expatriates, tested for COVID-19 since February 26 when the province declared its first coronavirus positive case in a young man who had a travelling history of Iran. Sindh reported its first death among the coronavirus infected people on March 20
According to the data, on average 2.43 deaths took place per day in Sindh in a span of 41 days after the day of first coronavirus death. As many as 44 deaths were reported during a period from April 20 to 29 giving an average of 4.4 deaths per day, causing a source of concern among the health circles.
The daily summary on coronavirus of the health department said that six of the COVID-19 patients lost their lives at Karachi while one each at Larkana and Ghotki, which pushed the tally of districts having reported such deaths to eight.
Karachi has reported in all 89 deaths so far, followed by Sukkur (4), Hyderabad (2), Shaheed Benazirabad (1), Tando Mohammad Khan (1), Matiari (1), Larkana (1) and Ghotki (1). Those who died at Karachi included four males of ages ranging from 68 to 74 years and two women of ages 55 and 66 years, respectively. One man of 45 years died at Larkana, while another man of 66 years died at Ghotki.
The health department did not give any further details but medical professionals believe that the old-age COVID-19 patients, mostly those who are old and have co-morbid like hypertension, diabetes, asthma or are smokers, find it difficult to survive.
The official infection report showed that the daily new infection rate of 88.77% for Karachi as on April 26 decreased to 83.41% on April 29, with 337 new cases, out of 404 tested across Sindh.
Sukkur reported 14 new cases, followed by Khairpur and Larkana districts, with 13 cases each, Hyderabad (9), Shikarpur and Shaheed Benazirabad, with seven cases each, Mirpurkhas (2) and Dadu and Umerkot, with one case each.
In the meantime, in his routine video message, the Sindh Chief Minsiter Syed Murad Ali Shah said that two flights from abroad brought back 505 stranded Pakistan to Karachi, out of which 69 were diagnosed as positive, while 39 results were yet to come.
He said that the testing capacity of the laboratories operating in Sindh was being enhanced, while a new lab at Larkana was being established. “Some industrial units and online business have been allowed to operate but they would have to follow the SOP,” he added–PNFS