KARACHI: Though the daily number of COVID-19 new infection cases has been on rise in the interior districts of Sindh in recent days the test results given by various laboratories located there showed their daily infection rate almost 66% less than what Karachi laboratories were witnessing on June 20 when the health authorities confirmed detection of another 2,190 new cases across the province, including 592 from the interior districts, with related 35 new deaths, taking the overall tally of patients succumbing to the virus to 1,048.
According to official data, five laboratories located in Larkana, Sukkur and Hyderabad, which had a maximum capacity of testing 3,700 samples, conducted 3,116 COVID-19 tests during the last 24 hours ending at 9 am on June 20, out of which 443 (14%) were declared positive for the virus, against 33% positive results given by laboratories working at Karachi. 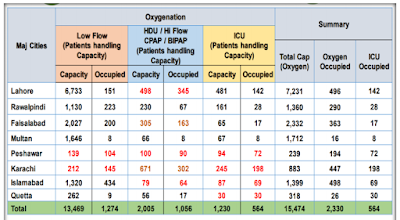 The preceding day, the interior districts laboratories tested 3,622 samples, out of which 421 (11.52%) were positive, against 35% positive results given at Karachi.

Keen observers assessed a couple reasons behind the phenomenal differences among tests conducted at Karachi and in the interior districts.
They reckoned that either samples presented to the interior’s laboratories were being drawn randomly, without following the tracing, tracking and sampling protocols, or by ignoring the suspected clusters and communities.
May be, many of the samples drawn from interior regions of the province were being forwarded to the laboratories in Karachi, a source privy to the process reflected.
Another observer opined that there still was a need to conduct robust sampling and testing in the interior districts to find the hidden cases. 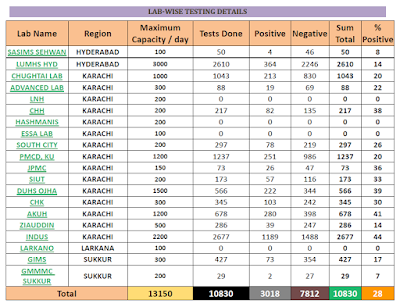 It was further learnt that Sindh had the maximum capacity of conducting 13,150 samples, followed by Punjab (9,910) and Islamabad Capital territory (7,682) besides other provinces and territories.

According to the Sindh health department’s daily summary, the district-wise breakdown of new cases on June 20 remained as: Karachi (1,598), Khairpur (123), Hyderabad (112), Ghotki (79), Sukkur (76), Mirpurkhas (33), Larkana (32), Anushero Feroze (30), Dadu (27), Sanghar (16), Shaheed Benazirabad (12), Kashmore (11), Jamshoro (8), Badin (6), Umerkot (6), Sujawal (5), Tando Allahyar (5), Kambar Shahdadkot (3), Jacobabad (3), Thatta (2) and Matiari (1).
In the meantime, COVID-19 deaths at hospitals continued unabatedly as Karachi registered deaths of yet another 31 patients during the last 24 hours ending on June 20, taking the megapolis death tally to 877, which was 84% of the provincial toll.
Those who lost their lives in Karachi’s hospitals or at homes included 23 men and eight women. The deceased men were aged from 41 to 93 years while women were within the age brackets of 54 to 90 years.
The remaining deaths of the day were reported from Thatta (one man), Kashmore (one man) and Kambar Shahdadkot (one man), while Larkana registered death of a women aged 82 years. The deceased persons belonging to Thatta, Kashmore and Kambar Shahdadkot were aged from 50 to 68 years.
As per another official report, four of the persons who died on June 19 were off ventilators and lost their lives at homes while another two were not put on ventilators as their doctors did not advise for it.
As at 10 am of June 20, as many as 78 intensive care unit (ICU) beds and 750 high dependency unit (HDU) beds were unoccupied at the various Karachi COVID-19 hospitals.
According to another official source, Sindh, which has at present 321 ICU beds with ventilator facility, may have it increased to 466 by the end of June and to 516 in July. Similarly, the existing 1,096 HDU beds at hospital may, as per the government plan, increase to 1,165 from 1,096 by the end of June and up to 1,375 in July–PNFS