KARACHI: Karachi witnessed an average of 28 COVID-19 deaths daily during the week ending on June 19 when the health authorities confirmed yet another all days’ highest 49 deaths in Sindh, including 44 at Karachi, while setting another one-day record of 2,894 new infection, against 24,87 new cases registered on June 10. 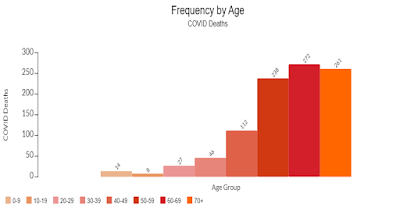 A day earlier too Karachi had registered 44 deaths, setting all days’ highest number of deaths due to coronavirus. In all 196 deaths occurred in the megapolis, which houses the maximum public, private and charity health infrastructures in the province, from June 13 to June 19.

Keen observers stay baffled at the situation. They have assumed that the doctors have become helpless in the prevailing circumstances at the various hospitals. A general perception was developing that the Sindh Healthcare Commission’s officers were missing from the scene.
“They should visit COVID-19 hospitals of all sectors to assess the services being given to patients and capabilities and competence of the health administration there.” 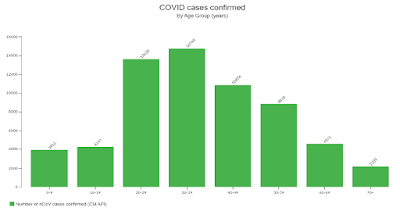 The corona positive people who lost their lives in Karachi and other four districts of Sindh during the last 24 hours ending at 9 am on June 19 included patients from different age groups.

As many as 26 men, aged from 32 to 90 years, and 18 women, in the age brackets of 15 to 84 years, expired at Karachi, while two men of 63 and 70 years respectively, could not survive the lethal diseases at Dadu.
Three more persons, one woman of 65 years at Sukkur, one man of 70 years at Kambar Shahdadkot and one man of 58 at Jamshoro, lost their lives to COVID-19, according to the Sindh health department, which had stopped releasing information about the deceased people’s hospitalization for a while.
Sindh’s total death tally reached to 1,013, out of a total 65,163 infections. In all 13,642 samples were tested during the last 24 hours. 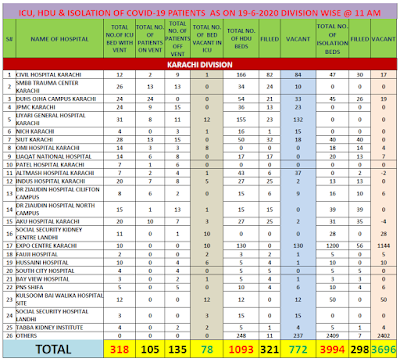 According to an official data, 78 intensive care beds were vacant at 16 hospitals of Karachi on June 19, in addition to 772 high dependency beds at over 20 health units–PNFS