Coronavirus Update: No death in Sindh after almost six months

KARACHI: Sindh, already overwhelmed by the officialdoms claiming COVID-19 has lost its intensity in the country, reported no related death on September 5 when the authorities in Karachi confirmed detection of 230 more infections during the last 24 hours across the province. 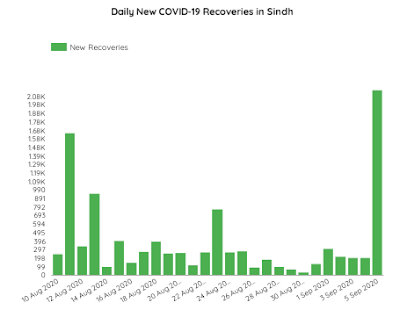 Moreover, the gap between the infected ones and those who got recovered from the diseases was also shrunk significantly in Sindh.
As many as 2,152 more patients were cleared by the healthcare providers on September 5 after completion of their COVID-19 treatment, taking the tally of the cured people to 126,164 (97%), out of 130,483 positive cases, for the province, while about 2% lost their lives.
Sindh had reported its first COVID-19 fatality on March 19 when a 77-year-old patient, a cancer survivor and hypertension case also, with a total of 217 existing cases on the day. The second such death had occurred on March 28 and since then the province registered one or more deaths every day till September 5.
The province, according to official data, updated on September 4, registered a maximum of 904 COVID-19 deaths in June, while the tally was 817 for July, 385 for May, 186 for August, 109 for April, 13 for September and eight for March. The highest one-day tally of deaths was witnessed in Sindh on June 28, with 74 deaths. Earlier, 48 and 49 deaths had occurred on June 17 and June 18 respectively. 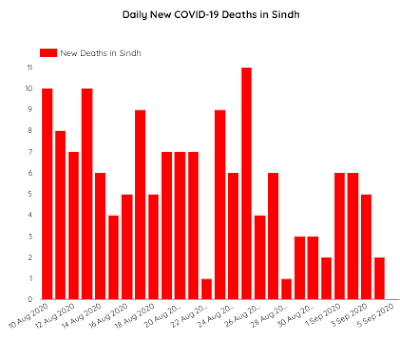 The Sindh Chief Minister, Syed Murad Ali Shah, in a message tweeted on September 5 that almost after six very difficult months they had no COVID-19 death in Sindh.

Resuming his statements after a gap of few days, he disclosed that there were 1,897 active COVID-19 patients across the province, including 1,578 at homes, six in isolation centres and 313 at the various hospitals, adding that as many as 141 were in the critical phase, while 16 were put of ventilators, as of September 5.

He urged people not to forget wearing a mask and keep themselves and their families safe.

Keen observers feared that the sighs of contentment were not going to be permanent in the given condition. The number of daily infection was still higher in Sindh, on the other hand the designated hospitals have not been able to check the cases turning critical and seeking ventilator intervention, the last hope for them in the intensive care units, they remarked.