KARACHI: Sindh performed about 41% of 24,857 new COVID-19 tests across the country during the last 24 hours ending on September 4 and reported 212 new cases, with two new related fatalities. 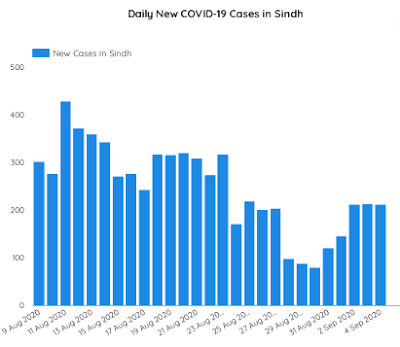 Pakistan reported in all 513 new COVID-19 cases, including 41% that Sindh registered out of its 10,145 new tests.
The national COVID-19 dashboard revealed that Sindh had 3,819 (41%) active patients, against the overall 9,132 patients registered countrywide.
As many as 124,012 patients have recovered from the disease, so far, in Sindh, against such national tally of 282,553.
Sindh reported that another 205 patients got recovered from COVID-19, while in all 285 patients got well in the country on September 4.
It was further learnt that Sindh as well as Pakistan did not have any new critically ill patient’s admission to hospital on September 4. Sindh’s overall tally of infection and deaths stood at 130,253 and 2,422, respectively, against Pakistan’s 298,025 and 6,340, respectively, on September 4. 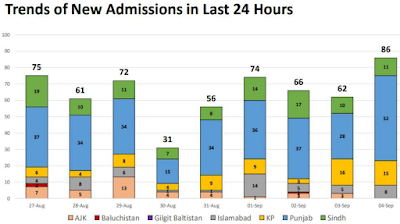 Sindh’s latest fatalities were reported from Karachi East (1), which has had the maximum active COVID-19 patients (556), among districts of Sindh, and Karachi South (1).

Of the five deaths, reported from Karachi on September 3, one occurred at home, according to an official report.

As of September 4, Sindh had 3,508 active cases in home-isolation, six in isolation centres, 305 in hospitals, including 165 those in critical condition.

About new infections, it was learnt that Karachi’s South district registered the maximum of 66 cases out of 137 the Karachi division registered during the last 24 hours while Badin registered 21 new cases, followed by Hyderabad (9), Larkana (5), Jamshoro (3), Sukkur (3), Thatta (3), Umerkot (3), Shikarpur (2), Dadu (2), Jacobabad (2) with Ghotki, Kambar Shahdadkot, Mirpurkhas, Sujawal and Sanghar reporting one case each–PNFS