KARACHI: As many as five COVID-19 patients lost their lives during the last 24 hours, against seven deaths across the country, while 214 new cases were detected across the province, taking the overall tally of infection to 130,041 for the province on September 3.

According to national COVID-19 dashboard, Sindh’s rate of daily infection remained 2.62 % on morning of September 3, against Pakistan’s overall daily rate of 2.14%.
The provincial government did not release any new data for the media on September 3, while the dashboard showed the overall death tally in the case of province as 2,420.
With 202 new recoveries from the diseases, the number of patients having recovered was mentioned as 123,807 for Sindh. In all 8,155 new tests were conducted till September 3 morning, while there were 3,814 active COVID-19 patients. 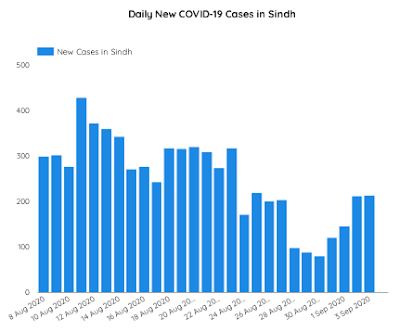 In the meantime, an official report revealed that 3,498 patients were in home-isolation, six were receiving treatment at the isolation centres, in addition to 310 at hospitals, including 140 hospitalized in critical condition, as of September 3.

As many as 21 patients were on ventilators. The persons, whose deaths were registered on September 3, were residents of Karachi Central (2), Karachi East (1), Karachi Korangi (1) and Karachi South (1).

It was further learnt that five persons who had died of COVID-19 on September 2 belonged to Karachi and the sixth one was from Hyderabad.

One thought on “Coronavirus Update: Sindh leads in infection, death”