Amidst reports that the Sindh government was contemplating relaxation during its not so stringent ongoing lockdown, Karachi division of the province reported the highest number of coronavirus related deaths for a day as eight people including a woman of 65 years lost their lives due to the disease in 24 hours ending at 8 am on April 19.
According to Sindh health department sources, the deceased patients were receiving treatment at public and private hospitals in the city. The ages of men who could not survive COVID-19 ranged from 45 to 80 years.
A study of the daily summary on coronavirus infections provided by the Sindh health department on April 19 revealed that the diseases had spread to all but four districts of Sindh now. Tharparkar was the latest inclusion after reporting its first corona positive case. 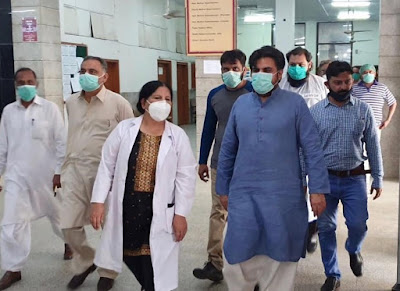 The major chunk of new positive cases, according to the official report, was identified at Karachi’s six districts (132), followed by Larkana (19), Tharparkar (5), Thatta (5), Hyderabad (4), Khairpur (4), Naushehro Feroze (2), Sukkur (2), Umerkot (2), Shikarpur (2), Jacobabad (2), while Dadu, Sanghar, Tando Muhammad Khan, reported one new case each.
The overall detection of 132 new cases took the provincial tally of corona infected people to 2,544, with 56 deaths, of which 52 were reported from Karachi since March 19 when the first such death was officially confirmed.
According to data, on average 1.80 deaths took place in a span of 31 days after the day of first coronavirus death. In all 24,438 people including expatriates, pilgrims and tableeghi jamat members have been tested for the virus.
A keen analyzer noted that the average rate of infection for Sindh ranged from 10.26% to 10.42% in the last three days when government sources claimed of conducting the tests at an extended level.
By generalizing the existing rate of infections over the entire Sindh population, estimated to be 50.5 million, the analysts feared that Sindh was housing over five million people who have already suffered or were suffering from the Corona disease while almost all districts were one after another reporting positive cases.
It was further said that a very small portion of them were being recorded as the government did not seem to be up to the mark in term of its capacity or policy towards coronavirus.
A few television channels quoted various government authorities saying that the ongoing partial lockdown imposed in the wake of coronavirus emergency will further be relaxed, offering certain standard operating procedures to traders and businessmen as well, shortly.
Meanwhile the Sindh Minister for Local Government and Information, Syed Nasir Hussain Shah, visited the KMC-run Abbasi Shaheed Hospital on April 19 where he handed over personal protection equipments to the doctors, nurses and paramedics in the wake of coronavirus epidemic in the city.
On the occasion, he said that not only the spread of the coronavirus was under control but many of its victims had also fully recovered due to the Sindh government’s integrated strategy.