Chemico Bacteriological Laboratory may take another five months for completion

The first phase of upgradation works of the Sindh government’s Chemico Bacteriological Laboratory (CBL), undertaken by the HEJ Research Institute of Chemistry, University of Karachi, may take another five months or so to complete, this emerged on April 19. 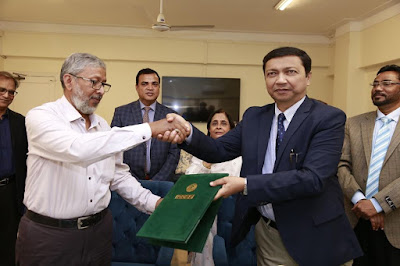 According to sources in the university, the Sindh government has released almost 60 percent of the total amount it promised in the cases of CBL and, upon completion of the first phase of the work, the government laboratory will be in a position to carry out selected forensic tests as per the international standards.
A review meeting was held at the HEJ institute on April 18, wherein Director of International Center for Chemical and Biological Sciences (ICCBS), Prof Dr M Iqbal Choudhary, informed the participants that the provincial government had released Rs 80 million, out of the total amount Rs 135 million, to the institute for the purchase of basic equipments and hiring and training of staff for the laboratory.
Prof Choudhary said that the tender process of instrument procurement for the first phase has concluded while the second phase of the work was specifically associated with the site preparation at CBL. “The basic upgradation work will be completed in the next four or five months,” he added.
The KU institute and the Sindh health department had signed a MoU in December last for the much awaited upgradation of the CBL located at the Sindh Services Hospital, Karachi, which had been conducting tests and releasing forensic reports related to murders, rapes, recovery of heroin and liquor and food samples, it was further learnt