Karachi reported another 112 positive cases of COVID-19 on April 18, while a senior citizen died at home due to the disease which has infected 2,355 people across Sindh since February 26.

An official source said that the latest corona related death has pushed the tally of people who lost their lives to the disease to 44 in the city, against 48 deaths in the province. The age of the deceased patient was mentioned as 65 years, while particulars like place of death, patient’s residential area, date of confirmation of the virus in him and reason behind keeping of such a patient at home were not disclosed.
When asked to elaborate the case, a health department’s personnel, on the condition of secrecy, informed that similar deaths have taken place earlier too. “We have had two more deaths of people in home isolation.” 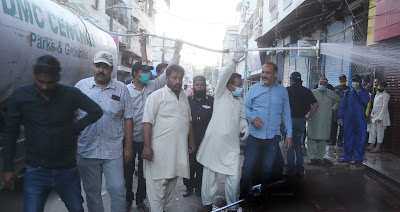 Earlier during the day, the Sindh Chief Minister Syed Murad Ali Shah, in a video message, also counted the new death, while saying that new cases of coronavirus were detected in thickly populated areas of Layri, Lee Market, Kharadar, Bihar Colony and different localities of various union councils of district East, Malir, Koarangi, Central and West. He further said having ordered extensive tests of the people in these areas.
The health department daily summary disclosed that all the infected pilgrims kept at Sukkur quarantine facility had recovered from the disease. In all 22,938 people have so far been tested in the province, of whom 1,402 tested positive for the virus in Karachi, 339 in Sukkur, 193 in Hyderabad,121 in Ghotki, 100 in Khairpur, 59 in Shaheed Benazirabad and the remaining in other 12 districts.
Overall 138 cases of new infection were confirmed in 24 hours ending April 18 at 8 am. As many as 1,716 infected persons were under treatment, the summary included.
In the meantime, a delegation of the Pakistan Medical Association’s office bearers, led by Dr Qaiser Sajjad met the Sindh Chief Minister at CM House on April 18 and presented a set of demands to him.
According to the association’s handout, the PMA demanded for incentives or risk allowance for doctors and medics serving as front line soldiers in the fight against COVID-19.
The PMA officer-bearers stressed activation of network of community clinics and hospital out-patients department by family physicians and general practitioners after providing guidelines and protective gears.
They also demanded for expansion of COVID-19 testing capacity at the district level in Sindh. “Specific area lockdown should be applied on the basis of hot sport finding or identification of clusters of corona positives.” they added.