By Mukhtar Alam:
The Karachi Mayor, Wasim Akhtar, has once again emphasized that the various hospitals run by the Karachi Metropolitan Corporation (KMC) were very much capable of contributing to the governments’ ongoing fight against the coronavirus pandemic but these were failing to seize the opportunity as neither the provincial nor the federal government had devised any joint strategy for the purpose so far. 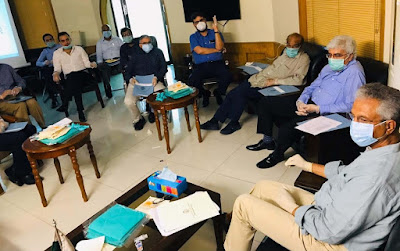 “The local government in Karachi has effective team of doctors, paramedics as well as infrastructure and 58 ventilators but all these things are not being utilized effectively by the federal and provincial governments,” he regretted.
Having said this, during his meeting with heads and owners of private hospitals and medical superintendents of public sector hospitals on April 18, the mayor disclosed that now the KMC was approaching private sector to serve the people in the metropolitan at large.
The mayor told the meeting that he had written several letters to federal and Sindh governments, asking them to provide assistance to the KMC for combating the coronavirus but to no avail.
Dr Ashfaq Sohail, chairman of Private Hospitals Association of Medical and Dental, Dr Asim Hussain of Dr Ziauddin Hospital, Dr Abdul Bari of Indus Hospital, Dr Salman Fareedi of Liaquat National Hospital, Dr Farooq Mamji of Mamji Hospital, Dr Asif of Ashfaq Memorial Hospital, Dr Ali Farhan Chishti of Darul Sehat Hospital, Dr Mazhar of Patel Hospital, Metropolitan Commissioner Dr Syed Saif-ur-Rehman, Senior Director Medical Services, KMC, Dr Salma Kausar, Senior Director Coordination, KMC, Masood Alam, among others, attended the meeting, according to a KMC handout.
The mayor observed that a large number of Karachiites visited the KMC-run hospitals, but they could not be given the due care in the context of COVID-19 in the absence of testing kits or the funds to buy the same.
He remarked that at present 2,500 to 3,000 tests were being conducted by the Sindh government, which could be extended to 6,000 provided the healthcare units of KMC were provided with these facilities.
“We have human resources, laboratories and intensive care units and all we need is technical assistance so that the people could be served in more efficient manner,” he asserted.
He further said that three designated centres were being established at Landhi Cardiac Emergency Centre, Abbasi Shaheed Hospital and Karachi Institute of Heart Disease with the assistance of private hospitals.
“The critically ill COVID-19 patients would be looked after in ICUs of Abbasi Shaheed Hospitals,” he announced.
On this occasion, he lamented that the situation might have been different if the provincial government devised any joint strategy involving KMC.
According to the KMC press release, Dr Abdul Bari promised to provide testing kits as well as personal protection equipment to the KMC, while Dr Asim Hussain and Dr Salman Fareedi assured the mayor of giving technical support to KMC for its ICUs and laboratories.