KARACHI: Sindh, with two related fatalities, reported over a half of the new COVID-19 cases detected in the country during the last 24 hours, taking the overall tally of the infected people to 312,806 for the country. 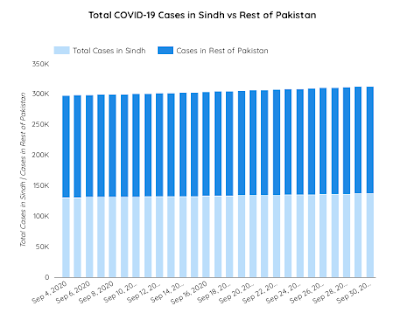 As many as 10,940 suspected samples were tested across the Sindh confirming 311 new cases with a positivity rate of 2.8% during the last 24 hours ending September 30 morning against a total 34,239 samples tested in the country. Pakistan’s overall new infection rate stood at 1.6% same day.
The details related to two new deaths in Sindh were not available as the Sindh health department’s officers remained silent about it. The daily situation report was updated for the last time on the department’s website on September 29.
The Sindh Chief Minister, Syed Murad Ali Shah, in a COVID-19 related statement, disclosed that there were 4,255 active patients across the province on September 30, out of which 3978 (94%) were in home-isolation, while six were in isolation centres against 271 receiving treatment at various hospitals adding that health condition of 181 hospitalized patients was stated critical, while 38 were put on ventilators.
He revealed that Karachi’s six districts collectively reported 221 (71%) of the new cases, while Hyderabad (14), followed by Jamshoro (6), Badin (4), Dadu (4), Sujawal (3), Ghotki (2), Khairpur (1), Naushero Feroze (1), Shaheed Benazirabad (1), Sukkur (1), Thatta (1) and others.
Another 215 patients were reported having recovered from the diseases, taking the number of cured patients to 130,352 for Sindh on September 30–PNFS