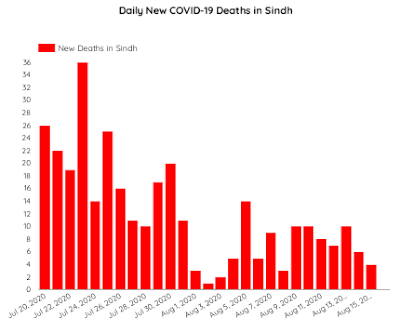 The Sindh Chief Minister, Syed Murad Ali Shah, in his COVID-19 statement on August 15, shared that 400 virus infected persons recovered from the diseases during the last 24 hours while the number of active patients stood 4,162, including 3,766 at homes and 388 at hospitals.
Sindh had 254 patients in critical condition, 36 of which were put on ventilators, according to the statement.
Keen observers noted that Sindh was yet to witness any stable COVID-19 status.
It had far too many ups and downs, which needs to be overcome now in order to give confidence to the masses. 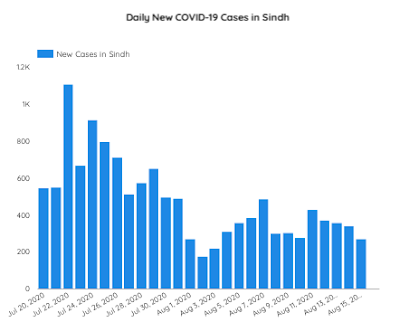 The province’s virus-related deaths had reduced to one on August 2, which, after many ups and down, was 4 which meant 67% of the country’s total deaths, on August 15.

Similarly, it registered the lowest number of infections during August, 177 on August 2, but failed to retain the down pattern in the following days.

Almost half of the designated COVID-19 laboratories did not perform any test during the last 24 hours, according to an official report updated on August 15.

However, LUMHS Hyderabad conducted the maximum of 5,401 tests, against its maximum capacity of 5,000 per day. It was followed by Indus Karachi Hospital which conducted 1,661 tests against its capacity of 4,000 daily.

Same day four patients died in the province, taking the death tally to 2317, but details about their hospitalization, age and gender and the district they belonged to were not revealed in the Chief Minister’s statement.

On August 14, six COVID-19 patients died in Sindh, including four at Karachi one each at Badin and a Larkana. The person who died in Larkana was a COVID-19 infected doctor.

So far, 54 doctors, one medical student, two nurses and 21 paramedical staff have lost their lives due to the infection in the country. According to an official report, only 134 ventilators, out of 1334 dedicated for COVID-19 patients across the country, were being utilized on August 14.

Earlier, 10 deaths registered in Sindh on August 13 occurred among patients belonging to Karachi, including three those at homes, according the report–PNFS