At a time when the medical practitioners and political leaders fear that the coronavirus may wreak further damages to humanity and pose new challenges to the healthcare settings, the latest Sindh health department’s updates represented a more frightening picture of the ongoing coronavirus onslaught which claimed another four lives of people of age ranging 53 to 77 years in Karachi that had a total 1,167 positive cases of infection with 41 deaths. 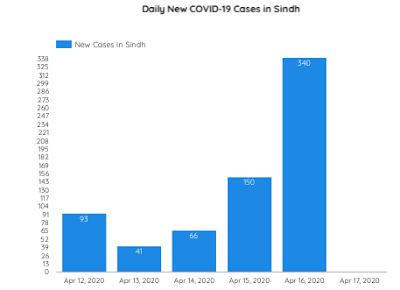 COVID-19 has already reached to 21 districts of Sindh with Tando Allahyar being the latest in the list of infected districts was where four positive cases of the virus were confirmed by health authorities in 24 hours ending April 16 at 8 am.
The official summary of entire cases showed confirmation of more new cases in Karachi (70), Ghotki (96), Shaheed Benazirabad (58), Sukkur (52), Sanghar (12), Larkana (11), Dadu (10), Hyderabad (8), Jamshoro (8), Sujawal (5), Naushehro Feroze (3), Badin (2) and Tando Mohammad Khan (1).
Those who died at Karachi included two women of 60 and 65 years, respectively and two men of 53 and 77 years, respectively.
In the meantime, according to the health department, 14 people recovered from the illness at Karachi and another two at Larkana. The overall infection rate remained 10.66%, with 18,826 tests and a total of 45 deaths revealed by the authorities concerned on April 16 across the province.
There were a total 2,008 coronavirus positives cases in Sindh, including 340 cases reported on April 16, against 4,911 cases reported by the rest of Pakistan. The 63.5% of the total new infections (536) in the country were reported from Sindh, according to the federal government data. 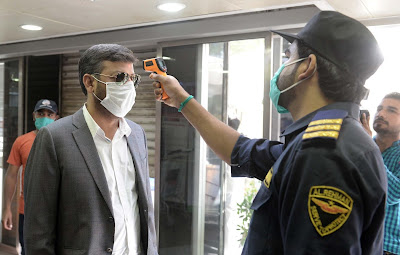 The Sindh chief minister’s law adviser, Murtaza Wahab, expressed concerns as the overall corona infection rate of 10.66% in the province jumped to around 12.5% on April 16, which was alarming.
“We need to adhere to the preventive measures seriously,” he remarked on a television channel, adding that the Sindh government understood that there was a need to enforce the lockdown in a more stringent and effective manner.
On the other hand, the former vice-chancellor of Dow University of Health Sciences (DUHS), Prof Dr Masood Hameed Khan, in a video message, feared that the coronavirus outbreak may worsen after April 26 in the country.
He was referring to the disease pattern in countries like the United States and other European countries said that the ongoing outbreak in the country may turn more dangerous from April 26 May 10.
During this alarming period the destruction caused by COVID-19 can create a grave situation, he warned, adding that while the government was expected to take further stringent measures, people across the country should also help prevent the virus from spreading any further.