Coronavirus Update: Another spike in Sindh

KARACHI: Sindh’s tally of new COVID-19 infection cases increased by 16%, compared to the preceding day’s figure, on August 23 when authorities in the government declared 319 more cases, with nine more related fatalities, during the last 24 hours across the province. 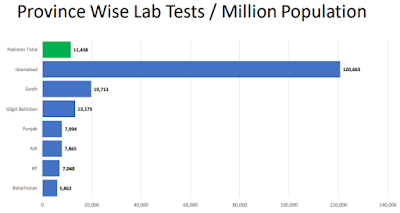 Sindh tested on average 8,785 samples daily during the last week (August 17 to 23), out of which 300 were detected as new cases of the infection. About 3.5% of all 9,027 tests performed in the province, against the collective capacity of 14,940, on August 23 were new cases.
As many as ten COVID-19 testing laboratories, including one at Sukkur, did not conduct any tests during the last 24 hours ending on August 23 afternoon.
The official data further suggested that Sindh needed to witness stability in its numbers of deaths as well. It had on average registered six deaths daily from August 16 to 22, while nine deaths were reported alone on August 23. 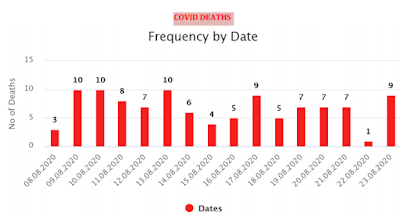 The authorities did not reveal the details related hospitalization, age, gender and area of living of the deceased persons but a report indicated that the only death that occurred on August 22 in Sindh was of a patient living in Karachi who died at home.

Keen observers believed that a majority of the nine patients who lost their lives on August 23 were not hospitalized.

The Sindh Chief Minister, Syed Murad Ali Shah, in his related statement on August 23, shared said that at present 4,002 COVID-19 patients were under treatment at homes (3,677), hospitals (318) and isolation centres (7). He informed that the number patients occupying ventilators in the various hospitals had decreased by just one.