KARACHI: Sindh witnessed an increase of 15% in COVID-19 daily cases reported by its interior districts on August 22 when the authorities concerned confirmed detection of another 274 infections during the last 24 hours across the province. 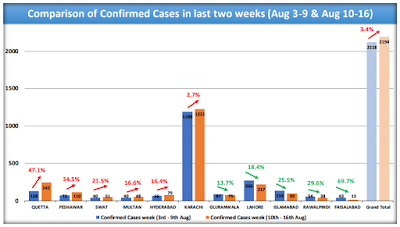 It was further learnt that the COVID-19 laboratories located at Karachi tested a total 4,200 samples during the last 24 hours, 2.61% of which were declared new positive cases, while the laboratories located outside Karachi in all handled 5111 samples and found 3.20% new infections.

In the meantime, the Sindh Chief Minister Syed Murad Ali Shah’s daily related statement, issued on August 22, revealed that Karachi reported 110 cases during the last 24 hours, against 164 (60% of the total new infection) reported by the interior districts.

The Chief Minister informed that as many as 4,463 people were receiving treatment for COVID-19 at hospitals (314), homes (4,142) isolation centres (07), 223 of them were in critical condition, including 31 those put on ventilators.

The figure of patients having recovered from the diseases remained 121,144 (95% of the infected cases) on August 22 when one more related death occurred, taking the tally of fatalities to 2,358 for the province. Any details about the deceased patient’s hospitalization, age, sex and city were not shared in the statement.