By Mukhtar Alam:
Sindh, which has entered an extended phase of lockdown until April 30, reported another 150 new cases of coronavirus on April 15, its highest one day tally since February 26 when the first corona patient of Sindh was identified at Karachi.
According to official data, with six new corona related deaths Sindh’s toll increased to 41 against Pakistan’s 111 deaths among 6,383 infected patients. Earlier Sindh had shown phenomenal increase on March 16 and March 19 with 116 and 119 new cases respectively.
Expressing concern at a press conference over the increasing rate of coronavirus infections in the province, the Sindh Chief Minister, Syed Murad Ali Shah, vowed for further tightening of the corona lockdown in Sindh.
He announced that, although some sectors may enjoy the exceptional relaxation in line with the federal government’s policy, Sindh will at the same time expect the strict compliance of standard operating procedures from them, including the construction sector. 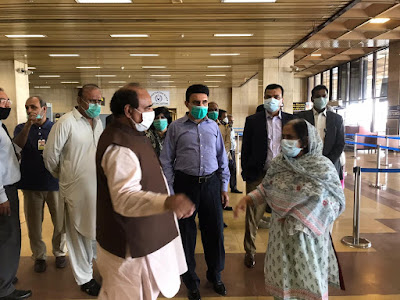 Sindh’s six latest deaths included a women living at Sukkur, while remaining five deaths took place at Karachi.
The official summary of corona cases, however, did not reveal the gender or age of the six people dying of corona.
In all 94 new cases were reported from Karachi, while 20 from Hyderabad, 28 from Shaheed Benazirabad, seven from Naushshro Feroze and one from Sukkur. Sindh has reported a total of 1,668 confirmed corona positive cases: Karachi (1,097), Sukkur (274), Hyderabad (196), Shaheed Benazirabad (36), Larkana (17), Khairpur (14), Tando Mohammad Khan (12), Naushshro Feroze (11), Jamshoro (2), Sujawal (2), Sanghar (2), Ghotki (2), Dadu (1), Jacobabad (1) and Badin (1).
As many as 271 patients recovered from the diseases at Sukkur, while 181 at Karachi, 108 at Hyderabad so far, according to Sindh health department report, which added that as many as 16,026 people were tested against the diseases, while the overall rate of infection came as 10.40% and rate of mortality due to infection was 2.45 per cent.
In the meantime, Sindh Health minister, Dr Azra Fazal Pechuho, along with Provincial Health Secretary, Zahid Abbasi, visited Karachi airport to examine the preventive arrangements made three in the wake of the expected arrival of Pakistani expatriates. The minister directed the health department staff to stay vigilant and ensure a fool proof screening of the travelers coming back.